Entertainment News for The Rest of Us
Tiffany D'Emidio
News 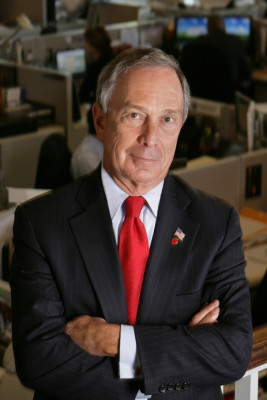 The Actors Fund’s annual gala on Monday, May 11, 2015 will honor entrepreneur and philanthropist Michael R. Bloomberg, Founder of Bloomberg LP, for his longstanding support of the arts as an individual, a corporate leader and Mayor of New York City.

Mr. Bloomberg will receive The Fund’s Medal of Honor, the highest award given by the 133-year old non-profit human services organization serving everyone in performing arts and entertainment. The event begins with 6 pm cocktails followed by 7:15 pm dinner and tribute at the New York Marriott Marquis.

Mr. Bloomberg, who served three terms from 2002-2013 as the as the 108th Mayor of New York City, is recognized for the hundreds of bold, innovative programs, policies and initiatives that made New York City a better, cleaner, safer place to work and live. In addition, his support for the arts through Bloomberg Philanthropies has worked to place arts at the center of economic growth and empower artists and cultural organizations in New York City and nationally.

“The Actors Fund does incredible work to support professionals in the performing arts, and it plays such an important role in New York City, the entertainment capital of the world,” said Michael R. Bloomberg. “The arts create jobs for New Yorkers, uplift and inspire audiences and viewers, and help make this the most exciting city on earth. As someone who cares deeply about helping the arts and artists thrive, and as someone who once sang a duet of ‘Impossible Dream’ onstage with Fund chairman Brian Stokes Mitchell (the audience survived, thanks to Brian), it’s an honor to be recognized by the organization.”

For tickets to the May 11 Gala evening, call 212.627.1000 or email actorsfund@resevt.com. For more information and updates, visit www.actorsfund.org/Gala2015.

THE ACTORS FUND is a national human services organization that helps everyone—performers and those behind the scenes—who works in performing arts and entertainment, helping more than 21,000 people directly each year, and hundreds of thousands online. Serving professionals in film, theatre, television, music, opera, radio and dance, The Fund’s programs include social services and emergency financial assistance, health care and insurance counseling, housing, and employment and training services. With offices in New York, Los Angeles and Chicago, The Actors Fund has been—for 133 years—a safety net for those in need, crisis or transition. Visit www.actorsfund.org.

Michael R. Bloomberg is an entrepreneur and philanthropist who served as mayor of the City of New York from 2002 through 2013. In 1981, he launched a technology startup to provide real-time data and analysis to the financial services industry. Bloomberg LP has since grown into a global tech company with a robust media division producing more than 5,000 daily stories. The company has offices in 73 countries, employs 16,000 people and serves 320,000 subscribers.

Bloomberg was elected mayor of New York City less than two months after the attacks of September 11, 2001. Under his leadership, the city rebounded faster and stronger than expected. His administration cut crime by 32 percent, raised high school graduation rates by 40 percent, reduced the city’s carbon footprint by 19 percent and increased life expectancy by three years. His economic policies, which supported entrepreneurs, small businesses, and emerging industries, such as tech and bioscience, all helped to create a record number of jobs.

During his tenure as Mayor, New York City was the largest single funder of non-profit arts and culture in the United States, allocating $1.8 billion to support programming and over $3 billion for construction projects in the five boroughs.  Major capital initiatives included the Downtown Brooklyn Cultural District, the Queens Museum of Art expansion, Lincoln Center for the Performing Arts’ redevelopment, and the Pershing Square Signature Center. The City prioritized the development of affordable rehearsal and studio space, and hosted nearly 500 temporary public art projects in communities across the five boroughs, including The Gates, The New York City Waterfalls and Make Music New York; in addition to increasing the City’s permanent Percent for Art portfolio of commissions by 30 percent. The Mayor’s Office of Media and Entertainment, which launched a “Made in NY” marketing credit for the film and television industry, spurred a $2 billion growth in film, theater, television and commercial production in New York City. During the Bloomberg administration, creative sector employment grew to include over 220,000 New Yorkers and helped the City reach record tourism levels, surpassing 54 million visitors in 2013.

As a philanthropist, Bloomberg supports artists and cultural organizations that are vital to the health and economic growth of communities. His foundation, Bloomberg Philanthropies, works to increase access to the arts with innovative technology and to strengthen cultural organizations through management training; and his company, Bloomberg LP, has supported cultural organizations around the world. Visual art is a required component of buildings he endows, which has resulted in commissions from leading artists, including Franz West, for an installation at the William H. Bloomberg MDA Jerusalem Station, and Spencer Finch, who designed the exterior of the Charlotte R. Bloomberg Children’s Center in Baltimore. Bloomberg has also served on numerous cultural boards, and is currently Chairman of the National September 11 Memorial and Museum and the Serpentine Gallery.

His passion for the arts has even led him to the stage. Bloomberg “danced” and “sang” along with the Broadway casts of Mamma Mia, Phantom of the Opera, and Hair in charity shows. He “conducted” an orchestra for the re-opening of City Center. And, a SAG-AFTRA card holder, he “acted” (as himself) in several Made in NY television and film productions, including The Good Wife, Gossip Girl, and A Muppets Christmas: Letters to Santa.