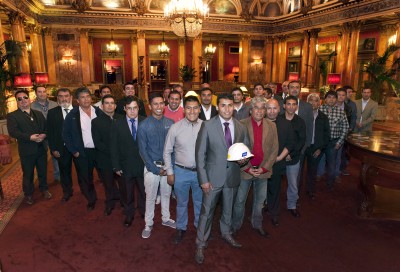 The Chilean miners, whose rescue from a collapsed mine occurred five years ago, reunited in Rome to celebrate the anniversary of their rescue.

Today, after having sharing their experience at a special screening of Warner Bros. film, The 33, and taking in the sights, they will visit the Vatican today to attend an audience with Pope Francis.

The 33 will be in theaters November 13th. For more, follow the jump.

BURBANK, CA – October 13, 2015 – The Chilean miners—whose miraculous rescue from a collapsed mine five years ago today captivated more than a billion people around the world— reunited in Rome yesterday to celebrate the fifth anniversary of the day they emerged from the mine.

In the Eternal City, the miners were applauded at a special anniversary screening of Alcon Entertainment’s and Warner Bros. Pictures’ inspiring drama “The 33,” where they were joined by director Patricia Riggen and producer Mike Medavoy. The film not only reveals the remarkable story of their survival against the odds but of the families, whose unwavering faith and support was instrumental in the rescue, and of the international team of rescuers, who would not give up until they brought the miners home. “The 33” opens nationwide on November 13, 2015, exactly one month after the five-year anniversary of the rescue.

During their trip, the miners took the opportunity to visit some of the city’s most famous landmarks, including the Coliseum, the Pantheon and the Basilica of San Giovanni.

Tomorrow, as the culmination of their Rome visit, the miners will go to the Vatican to participate in an audience with Pope Francis.

In 2010, the eyes of the world turned to Chile, where 33 miners had been buried alive by the catastrophic explosion and collapse of a 100-year-old gold and copper mine. Over the next 69 days, an international team worked night and day in a desperate attempt to rescue the trapped men as their families and friends, as well as millions of people globally, waited and watched anxiously for any sign of hope. But 200 stories beneath the surface, in the

suffocating heat and with tensions rising, provisions—and time—were quickly running out. A story of resilience, personal transformation and triumph of the human spirit, the film takes us to the Earth’s darkest depths, revealing the psyches of the men trapped in the mine, and depicting the courage of both the miners and their families who refused to give up.

Based on the gripping true story of survival—and filmed with the cooperation of the miners, their families and their rescuers—“The 33” reveals the never-before-seen actual events that unfolded, above and below ground, which became nothing less than a worldwide phenomenon.

“The 33” is a presentation of Alcon Entertainment, co-founded by CEOs Andrew A. Kosove and Broderick Johnson. A Phoenix Pictures production, the film is being distributed domestically and in select international territories by Warner Bros. Pictures, a Warner Bros. Entertainment Company.