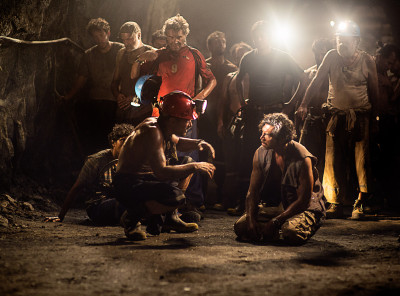 In 2010, a mine in Chile collapsed trapping thirty-three men under 700 tons of rock – deeper underground than the length of two Empire State Buildings. After 69 days, they were freed.

The 33 is the story of the miners; their loved ones who erected a temporary town on the site, and the men who worked to save them. Considering that it’s telling three interconnected stories, it’s a miracle that it got made at all – let alone this well.

The film opens with a gathering of friends and family where we get to see the miners and their families enjoying each other’s company as they eat and gossip and tease and play. From there, their arc moves to the mine the next morning, where shift manager/safety officer Don Lucho (Lou Diamond Phillips, Longmire, SGU Stargate Universe) expresses concern over signs that the mountain in which the mine is located has shifted enough to be a problem. The mine owners’ representative pooh-poohs the idea and sends the crew off to work.

The miners get to their level and begin working and the mine collapses. They barely make it to a somewhat reinforced section called the Refuge, where there’s food and water – and, allegedly, a comm link to the surface.

It isn’t even connected. Worse, there are no medical supplies and a pitiful amount of canned tuna, some cookies and a few bottles of water. Even a ladder that’s supposed to provide an emergency exit hasn’t been completed.

When news of the collapse reaches the town, the families of the trapped men congregate outside the fenced-off perimeter of the mine. They are refused entry and no one will tell them what’s happening.

In the capitol city, rookie Minister of Mining Laurence Golborne (Rodrigo Santoro, 300), persuades the President Sebastián Piñera (Bob Gunton, 24, Daredevil)) that the government should be seen to be trying to help and heads off to the mine – where he makes a negative impression on the sister of one of the miners before his efforts lead to a team of rescuers led by chief engineer Andre Sougarret (Gabriel Byrne, In Treatment, Vikings). 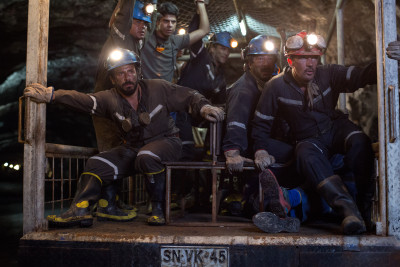 In the Refuge, it seems like things are falling apart when a few of the miners break into the food locker and start eating cookies. It’s at this point that Mario Sepulvada (Antonio Banderas, The Mask of Zorro, Desperado) brings sanity and reason into play, calms things down and basically steers the thirty-three through the next 69 days.

The 33 was written by Mikko Alanne, Craig Borten and Michael Thomas – based on the book Deep Down Dark by Hector Tobar – and directed by Patricia Riggen. It’s quite an achievement when you consider that there are close to fifty roles that are important to the story – and when you consider that life doesn’t conform to the typical three-act structure that is common to most movies.

As a result, we don’t get a lot of character development – most of what we learn about the people involved comes from having a cast that is supremely capable. And what a cast Riggen has assembled: Cote de Pablo (NCIS, The Dovekeepers), Juliette Binoche (Three Colors Trilogy, Chocolat), James Brolin (Blackout, Castle), Jacob Vargas (Hand of God, Sons of Anarchy), Juan Pablo Raba (Narcos), Oscar Nuñez (The Office), Kate Del Castillo (The Book of Life, Jane the Virgin), Naomi Scott (Love Bites, Terra Nova), and so many more.

Juggling the arcs of the miners, their friends and family, the rescuers’ efforts and the political stuff would be difficult enough in a fictional film, but in a film about an event that captured the attention of the whole world – an event where we know how it worked out – that adds a whole ‘nother level of complexity, and room for screwing up.

Whether dealing with thirty-three miners in a hot, claustrophobic bubble under a mountain or the temporary town on the equally hot surface, Riggen and company do not screw things up. The 33 is an uplifting story well told.