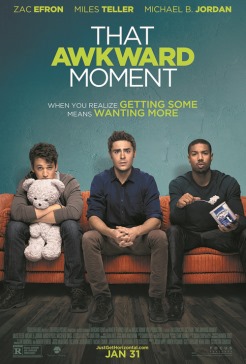 The premise of That Awkward Moment is that that moment when a relationship could go either way is can usually be pinpointed. As Zac Efron’s character Jason puts it, when a girl “begins a conversation with ‘So…’ Writer/director Tom Gormican takes this idea of awkward moments and tries to makes create a hybrid romantic dramedy/buddy movie out of it.

The basic set up is that Mikey (Michael B. Jordan) and his wife have just broken up and his buddies – Jason (Efron) and Daniel (Miles Teller) pledge that they will not get into any serious relationships to show their support for his re-entry into the singles world.

Jason, though, meets Ellie (Imogen Poots) in a bar where he starts riffing on why a guy who wants to buy her drink doesn’t deserve to – a riff that she jumps on and embellishes. Having established that they are both smart and have similar senses of humor, things get hot, quickly. Daniel, meanwhile, uses his buddy Chelsea (Mackenzie Davis) as a wingman – a plan that isn’t all that fruitful.

Both Jason and Daniel attempt to get Mikey back into dating/scoring – but when he actually meets someone who seems interested, they inadvertently sabotage him (though not before he gets her number).

Unfortunately, neither buddy manages to remain solo. Jason seems to have fallen for Ellie and, despite a horrible misunderstanding of the phrase ‘dress-up party,’ vice-versa. Meanwhile, Daniel seems to have recognised his buddy Chelsea is an amazing person – possibly when she torched her way through a bluesy tune complete with some hot piano licks… 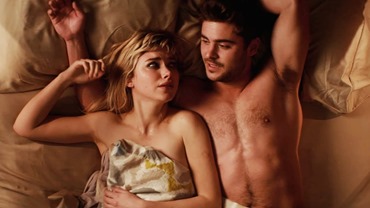 Throughout, romantic moments are interspersed the kind of gags you expect to see in a comedy like 21 & Over or Superbad. In a way it’s like watching a crasser Sex and the City only with male leads. This is not a Bad Thing, as such, though the balance between the two isn’t quite right – and some of the running gags could have been axed (with prejudice in one case).

A lot of That Awkward Moment feels true – I’ve had similar conversations to a few of the ones between the three guys and yes, Gormican nails that. Where the movie slips a bit is in the too stereotypical handling of the female characters – even Ellie isn’t given as much depth as the guys, though she’s a match for them in every way (and vastly superior in looks).

The most interesting relationship is easily the one between Mikey and his ex, Vera (Jessica Lucas). It is, far and away, the most unpredictable one in the movie – the one whose conclusion could have been better used else, but you know what they say about wishes and horses…

Then there’s the matter for the ending. Given the events of the movie (the word betrayal springs to mind), the ending has the feel of a tacked on/arbitrary Hollywood ending. When I came out of the screening, that felt like the only moment that was just not real.

Early on Jason is asked about his love life. That question – and his reply – should probably have been the basis for That Awkward Moment’s finale. Chances are, that if a woman had written the script, it might well have gone that route. Instead, well, let’s just say that Gormican is a better director than writer. He keeps the movie moving well enough – and gets enough support from the solid work from his cast – that it holds up while it’s being watched, though it does suffer on reflection afterward.

Overall, it works well enough to provide an hour-and-a-half of entertainment. There a lot of movies that don’t even do that.