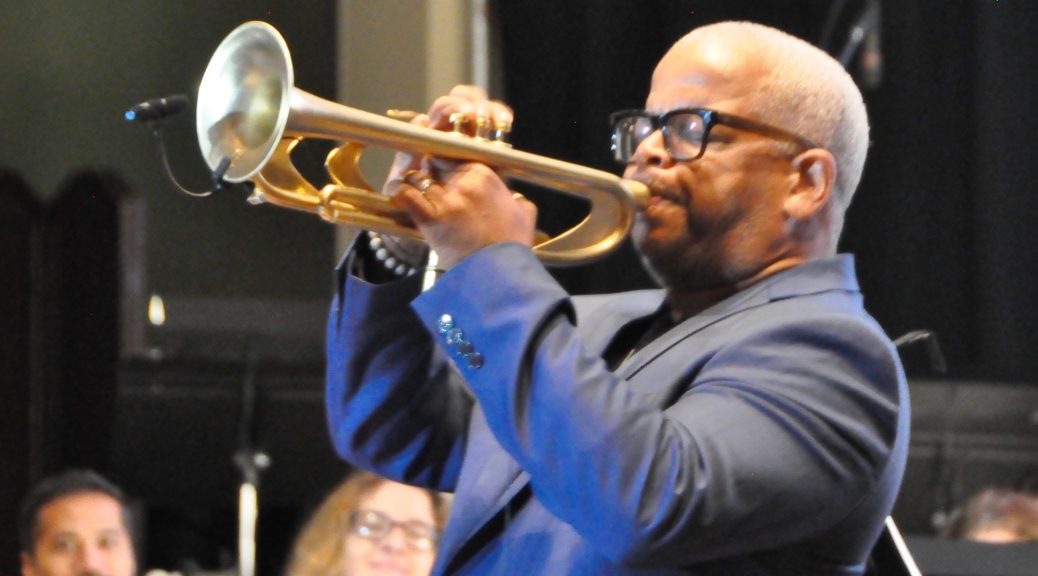 We’ve heard some of your amazing scores with Harriet, with Eve’s Bayou, with Malcolm X. I wanted to know when did the journey start for you?

Oh, man. It started years ago, when I was working with Spike. I was playing on one of his earlier films. I think it was School Daze, and next thing you know, he called me to do Mo’ Better Blues. And while we were recording the pre-recorded tracks, I hear him playing something on piano. Asked if he could use it, then asked if I could write an orchestral arrangement for it. That’s how it all started, man. I had no idea my life was going to go down this path. I was supposed to be Miles Davis of the jazz world, but next thing you know, all of a sudden I’m writing music for movies.

Absolutely. Harriet is the recent film you just scored, and it is a beautiful score. In fact, I just saw it Friday night (at Middleburg Film Festival). When it comes to film scoring and composing, how does that work? Do you talk to the director? Do you add some of your input?

Well, yeah. Initially, you do have to have a conversation with the director to understand how they want to tell the story, because there’s a million and one ways you can write music for any film. So, you want to try to help the director tell their story their way as much as possible. So once we have those initial conversations about concept, I go off and start to create some themes and write some melodies. I’ll send over—Casey, man, I sent her some stuff. She told me, “oh, I like this one for Harriet’stheme” and we just kind of went from there. And once we did that, she started to send some footage, early footage, before she had a full cart and I started to see the film and thought it was just amazing. It was gorgeous. It was beautiful. Cynthia Erivo is amazing. And I remember at that moment, it was one of those moments where you go, “man, I’m so blessed for being a part of this project.”

And we thank you for being a part of this project as well. One of my favorite scenes in Harriet was the scene where she crossed from Maryland to Pennsylvania. When you saw that scene for the first time and tried to think of the perfect blend of music and orchestration to come together, what went through your mind?

Man, so many things went through my mind. Growing up in the south, listening to the stories my parents told me about things that they went through. And the notion of being enslaved. Having your rights taken away from you in unfathomable, and to see off in the distance your freedom, your full capabilities of controlling your life just over there is an amazing emotion, and for me, you know, I thought about some of the stories my dad told. I’ll just tell you real quick.

I played a hotel in New Orleans with Lionel Hampton one year, and as we were walking up to the hotel to do the gig, my father came and started to cry. I said, “hey man, what’s wrong?” He said, “you don’t understand. I used to work in this hotel. When I worked in this hotel, I worked in the room that you’re playing, and I was only allowed to go in the room to bus the tables, and I had to walk through the back to get to my job. Now I’m walking through the front of the same place to see my son play.” It’s things like that that came across my mind in that scene. We call it Walking to Freedom.

Perfect title. So, of all the films you have scored, from Spike Lee to Kasi to all the directors, do you have a personal favorite?

Oh, no. It’s hard to—because I appreciate all of them, and then just doing the concert I just performed, listening to the music again, it just takes me back on a journey of development, you know? I remember those moments of discovery for all those films, and I’m humbled at having had the opportunity to having such a body of work to look back on.

We just heard your concert just moments ago in fact. I think I just found my new ringtone with the theme from The Comedian.

Yeah, I really love jazz, and I really love that theme. And you played with The E-Collective, which is your band, so I want you to tell us a little bit more about your band.

Well, the E-Collective was initially a group that I put together to influence to sort of influence kids to play some instruments. It’s sort of a groove-based band, even though we didn’t do much of that tonight, because these guys are very versatile. And it’s been a great journey playing with these guys. Fabian Almazan and Charles Altura are two great musicians; two amazing musicians. And, you know I’m not only inspired by them on a nightly basis, but I’m learning all the time from them as well. And it’s a great thing to be around them, just in any type of creative situation, whether it be concerts or films.

Indeed, it is. So, tell us who some of your musical influences were growing up and have you met them? Because when you talked about some of the people that you worked with—Dizzy Gillespie and Wynton Marsalis—it’s like you worked with the great jazz musicians of all time.

Yeah, I’ve played around from the time I was 19 years old and I got a chance to meet all my heroes who were still living at the time. Clark Terry, Freddie Hubbard, Woody Shaw, Dizzy Gillespie, Miles Davis, Herbie Hancock, Chick Corea. The list is endless. Sonny Rollins, Joe Henderson. And I’ve got a chance to either play with them or be in situations where we wound up playing together, like in a jam session or something like that.

So I feel very blessed man. And now, to continue and to have that continue on this next generation of musicians that’s coming up, you know, like Charles and Fabian, it’s a beautiful thing to witness because I see myself in them, you know, when I was their age, and I understand what it is they’re going through and I try to help them along the way and talk to them about certain things. (laughs) But they end up educating me on a lot of things as well.

And you recently had a Grammy win for Blut Und Boden, which I hope I pronounced correctly. and you also had an Oscar nomination for BlacKkKlansman, and hearing that theme once again, it’s amazing. And now, you’re about to take your second opera into Broadway, to New York at the Met Opera, and you are the first black composer in its entire history. So I want you to tell the audience about your upcoming opera that we’re about to see in 2021-2022 season.

Well, it’s called Fire Shut Up in My Bones, and I’m also blessed to have been working with Kasi Lemmons on that because she wrote the libretto for that and it premiered in St. Louis this summer. But it’s the story of Charles Blow’s life growing up in Gibson, Louisiana, and it’s very powerful because he was sexually assaulted by a family member and just generally mistreated for being a different type of kid. But the story’s a very powerful one.

It’s a story of resilience and redemption and there’s a moment in the thing where he’s going through a lot and he’s angry, he’s full of rage and he wants to act on it. And his mom just tells him, “hey, you gotta learn how to leave it in the road.” And at that moment, he just turned his life around. And I think the beautiful thing about it is that we have him around to be the shining example of what it is you can accomplish if you set your mind to it, no matter what you’re going through. That’s one of the reasons why I love doing this story, and to have it going to The Met, man, is an overwhelming honor. My father loved opera. My father was a baritone and I tend to think that he’s up in Heaven pulling all of these strings because he wanted me to go down the classical road and I went down the jazz road.

That’s how it always happens. Yeah, yeah. So, it’s still an amazing thing to have to happen. When I told my mom, that was the first thing she said. She said, “boy your dad would love to be there. You probably wouldn’t be able to get him off the stage.”

So, here we are at the Middleburg Film Festival. You are one of the elite people to be honored for your work in music, film scores. How does that feel?

Frankly, I’m still taking it in. You get to the point where you’re worried about rehearsing and getting the music right and performing, and then after it’s all done, I go “oh, right. I was just honored.” And it’s an amazing thing because you’re among your peers. That’s the thing that’s beautiful about it.

So, I’m still soaking it in. Maybe if you asked me tomorrow I’ll have a more concrete answer for you, but right now, man, it’s just a whirlwind of things going through my mind.

For all the upcoming musicians who are listening and reading, and they want to be where you are right now, what advice would you give them?

The second is do your homework. When Spike called me to do Malcolm X, which was my second film, man, I started listening to film scores. I started picking them apart. I started picking them apart just like I learned how to play jazz, by listening to Miles Davis. So, I was doing my homework. The other thing is to work hard. Work hard. That goes back to “don’t lie.” If you write something for a scene that’s not working and then somebody tells you it’s not working, don’t try to convince them otherwise.

You know what I mean? Because, there’s something they’re not feeling, something they’re not getting, and that’s a hard thing because you put a lot of time and effort into it, but that’s the reality of what it takes to be a film composer. So, you have to learn to take the personal stuff out of it and make sure that you’re doing what the director needs you to do to help them tell that story.

I wish that some of our listeners and readers could’ve seen your concert because it is amazing. Thank you, Terence, for the amazing interview! Hear Terence’s beautiful score in Harriet – IN THEATRES NOW!