Terminator: Dark Fate easily surpasses the low bar set by the third, fourth and fifth movies in the series – and not least because it completely ignores them and has a few different and entertaining tweaks.

T:DF opens with Sarah Connor (a ripped Linda Hamilton) losing her son – it turns out the T-800 she saved him from wasn’t the only one sent back. 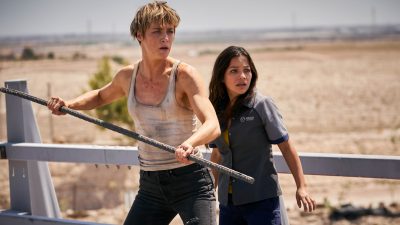 Cut to Mexico – and a familiar crackle of localized lightning heralds the arrival of a very different time traveler. And another.

One is female (Mackenzie Davis); the other male (Gabriel Luna)

The next morning a family (father, son and daughter) begin their day as Danielle ‘Dani’ Ramos (Natalia Reyes) and her brother, Diego (Diego Boneta), prepare to go to work. 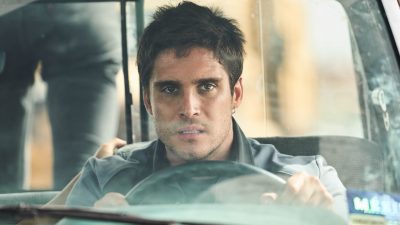 At work, their day goes wrong immediately when Diego is informed that he’s being replaced by a machine and, while Dani pleads with her boss not to fire him, the male time traveler arrives – in the form of the Ramos’ father.

As he moves to attack Dani, he is intercepted by the female time traveler (whom we learn is called Grace).

Next thing you know, the Dani, Diego and Grace are fleeing – leading to a chase sequence that ranks right up there with the best in Terminator canon.

Just when things look bad – bad enough that Diego is killed – up roars Sarah Connor, who proceeds to blast away at what we soon learn is a Rev-9 model terminator.

We learn a number of things from in the film’s opening act: the Rev-9 has been back in time to kill Dani; Grace has been sent to protect her, and Sarah Connor has a unique source that gave her the location on a bridge in Mexico that led to her saving Dani and Grace.

We also learn that the Rev-9 can detach its original form from its human likeness – and both are still just as deadly. Also, it wasn’t sent by Skynet but rather an AI that calls itself Legion. Plus, the reason for Dani’s death is not what we are expecting. 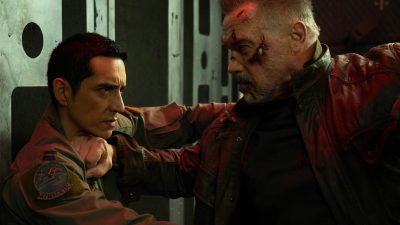 Then there’s our old friend Carl, the draperies salesman – the last T-800; who has evolved in ways that provide a bit of poignancy and no small amount of humor to the proceedings.

This is not your papa’s Terminator.

As with the first two Terminator films the story is fairly simple – but almost as smart as the first two films. It never gets to self-satisfied and smug – staying in its lane and not getting too philosophical or convoluted (though it does a fair number of smart tweaks and has a lot of fun playing against expectations). 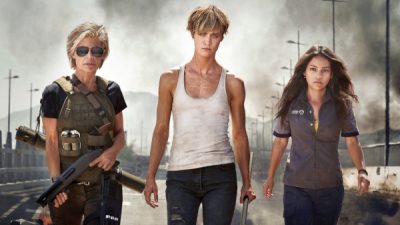 Terminator: Dark Fate is beautifully shot and jam-packed with state-of-the-art digital magic, but never loses the humanity that made T1 and T2 classics.

Director Tim Miller (Deadpool) keeps things moving at a satisfactory pace (pedal to the metal, anyone?) with moments where both characters and the audience can catch a quick breath before barreling onward – and using action sequences to help us understand the characters. He’s a prime proponent of the ‘show, don’t tell’ school of filmmaking.

Terminator: Dark Fate may not quite reach the lofty classic status of the films to which it is a direct sequel, but it nudges in that direction. It will rinse that hideous left in your soul by the three films it leapfrogs.