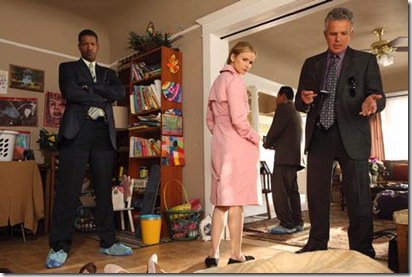 Los Angeles Deputy Brenda Johnson [Kyra Sedgwick] is facing a season of change as The Closer [TNT, Mondays, 9/8C] embarks on its fifth season. Now that she and Fritz [Jon Tenney] are married – and back at work – things haven’t quite smoothed themselves out. Not only is Brenda still adjusting to being married, her cat is sick [and we know how much she loves Kitty] and someone has just killed four of five members of a Hispanic family, execution style – a crime that is likely to cause serious repercussions in the community.

Brenda’s equanimity is sorely tempted at the crime scene as the both coroner and Detective Provenza [G.W. Bailey] arrive late after going the wrong address. When Detective Flynn angrily assumes the husband did it, she almost rips him a new one. But did the husband do it? When the exhausted, depressed Provenza accidentally drives the chief to that other address, suddenly things aren’t so clear.

As is usually the case, the mystery in The Closer’s fifth season premiere is just well enough developed that it keeps us alert to Brenda’s moments of revelation – and into it enough to make her signature interrogations enthralling [whether she’s questioning the actual killer or some red herring]. 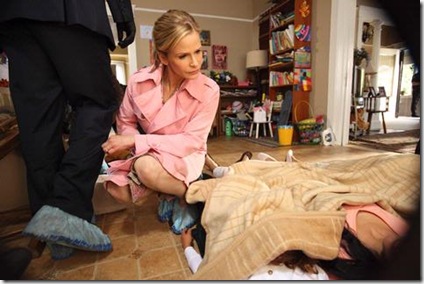 The episode, Products of Discovery, also introduces the possibility of departmental lack of co-operation as pivotal element – and gives J.K. Simmons a chance to show how effective Assistant Police Chief Will Pope can be in handling the fallout of such a tense situation.

Director Michael M. Robin refrains from taking writer Michael Alaimo’s scripts into too stylized a direction. It would be easy to darken the tone of the ep too much, but Robin keeps things nicely balanced. Products of Discovery is not an ep with a lot of comic relief, so Robin zeroes in on Provenza’s disgust with love to create a few much needed light moments – and uses them to reveal a critical plot point.

Overall, the fifth season premiere of The Closer is pretty much the usual solid episode. The supporting cast is as solid as ever and Kyra Sedgwick makes watching Brenda’s thought process and interrogations as compelling as ever.