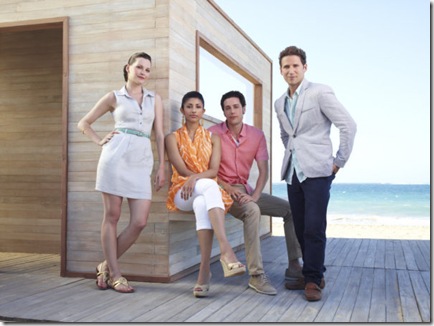 One of the endearing qualities of Royal Pains [Tuesdays, 10/9C] as it begins its second season tomorrow evening is that it’s all about its characters – where many medical shows are about their situations. Tomorrow’s premiere finds HankMed broke; Divya about to face a huge life change; Boris about to encounter health problems and Hank and Evan at loggerheads over the firm’s financial state.

Spasticity opens with Hank [Mark Feuerstein] chasing down Evan [Paulo Costanza] and confronting him about the slim likelihood of their father ever returning their money; Jill [Jill Flint] facing a possible loss of employment; Divya [Reshma Shetty] engaged to a man she hardly knows, and Boris [Campbell Scott] admitting he has a terminal illness. Then there’s the patient of the week, Spencer the Spaz, an infomercial king whose products were invented by his crazy father.

Spencer has been trying to demolish his father’s panic room – with less than wonderful results. By the third time HankMed is called in, things are getting serious. Meanwhile, Jill’s mentor [Marcia Gay Harden] has started proceedings to have her fired – just as Spencer offers her all his father’s medical supplies to help set up her free clinic. By the time we reach the conclusion of Spasticity, the two arcs reach an intriguing and entertaining conclusion – and Hank and Evan take steps toward forgiving each other [think flashy car…]. The final scene provides a genuine revelation – and a good laugh!

Like Burn Notice, Royal Pains is, at heart, a fish out of water story – though in each case, the new guy has to acclimate or be left behind. In the case of Royal Pains, this means that Hank adjusts to dealing with his rich new patients medically, but remains bemused by the lives they lead in The Hamptons. This is shown most clearly in his dealings with Spencer. His overall adjustment shows in his handling of Boris and his terminal illness. Though he may be in unfamiliar surroundings, for Hank, it’s all about helping. That’s how he copes.

Spasticity is a solid ep. Written by series creator Andrew Lenchewski, it gives us new insight into the show’s cast of characters while deftly balancing multiple arcs that absolutely have to converge. Though the ep moves a little slowly at times [I couldn’t find a credit for the director], there’s an abundance of character development given to us, so it kind of balances out.

Still, while I thoroughly enjoyed the ep, I feel like the show has a lot more potential than has been hinted at here. Perhaps, like its Tuesday night companion, Burn Notice, Royal Pains will hit its stride in the first half of this season.