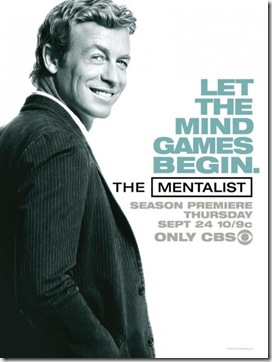 The second season premiere of The Mentalist [CBS, Thursdays, 10/9C] gets to a quick start when CIB consultant Patrick Jane [Simon Baker] solves a murder in a department store in a matter of minutes. That the murderer causes a quarter of a million dollars in damages when he tries to flee – and the Sacramento Police file a complaint – but it’s all the same to Jane, who’s been as Agent Lisbon [Robin Tunney] pits it, running hot ever since he and Lisbon’s team narrowly missed capturing Red John [the serial killer who slew Jane’s wife and child to teach him a lesson] in the first season finale.

Now, though, Lisbon’s team and Jane have been taken off the Red John case and replaced by the seemingly oafish Agent Sam Bosco [Terry Kinney] – and that really gets Jane’s goat. To further complicate matters, there’s a murder – of an apparent middle-aged housewife in her small apartment, which has been thoroughly searched for… something. It might be the million dollars the woman is alleged to have stolen; it might not. Jane’s observations lead to a family in another town; a loving husband, a cancer-survivor son and a daughter who loathes her mother.

As has become the pattern, Jane’s eccentricities provide most of the clues necessary to catch the killer, but each of the other members of Lisbon’s team contribute – with a big piece of the puzzle coming from relative newbie, Agent Grace Van Pelt [Amanda Righetti]. During the investigation, Jane takes a few moments to meet with Bosco to see if he’d be willing to share information. One out of two isn’t bad.

Series creator Bruno Heller wrote the episode, Redemption, and gives Baker a lot of choice material to play with. From the over-the-top confrontation with the first killer during the teaser, to Jane’s giving every appearance of quitting, to his “fishing expedition” with Agent Kendall Cho [Tim Kang], Baker gets to play arrogance, disappointment, contrition and glee – with a dash of smug thrown in for good measure.

As smart as Jane is, his achievements wouldn’t be nearly as impressive if he weren’t working with a team of smart, experienced agents. Heller understands this and gives each of the team something to do – except for Owain Yeoman’s Agent Wayne Rigsby, who gets to be the ep’s comic relief while simultaneously locating the crucial bit of physical evidence while being directed by Jane.

As one of the show’s regular directors [he did four first season eps], Chris Long keeps the pace up and keeps Baker in his sweet spot. He also moves thing along in such a way as to make it more difficult for us to determine which clues are the ones that will lead to the solution of the crime. His ability to misdirect his audience is on a par with Jane’s. The result is a solid, entertaining hour.