In the season two finale of Burn Notice [USA, Thursdays, 9/8C] we finally got an answer to the question, “Gee, Michael, with all the mayhem you cause every week, why haven’t the police thrown your ass in jail already?” Turns out that Michael [Jeffrey Donovan] had a guardian angel – in the form of the agency that got him burned, and personified by the gregarious Management [John Mahoney]. In season three – even we don’t see him in the first three eps – Management makes his presence felt by informing the police that there is a rogue spy in town and Michael gets to spend time in jail. 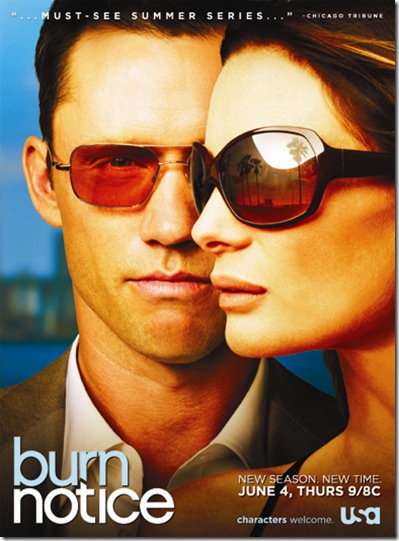 One thing that remains the same in season three is the way Michael [whom creator Matt Nix calls “a do-gooder at heart”] continues to take on jobs helping the victims of the various ills of our society – like helping to capture a vicious Latin American ex-pat who’s living it up in Miami; find, extract and return a kidnapped boy to his bickering parents, and save his brother’s life by running a few “errands” for a charming but deadly arms dealer. Something that has changed is that the police, and every spy agency that might want him dead, know about Michael – and he still can’t leave Miami!

In the opening trio of eps, Michael, Fiona [Gabrielle Anwar] and Sam Axe [Bruce Campbell] mange to work their magic with only the usual amount of chaos and violence – but beginning in the second ep, Friends and Family, Michael is served notice that a beautiful but tough police detective, Charlie Marks [Moon Bloodgood], is going to be paying very close attention to him. It soon becomes clear that Marks is not only tough and beautiful, she’s also determined, smart, and absolutely untouchable in the arena of dirty secrets. Our gang is going to have their hands full!

By removing the largest part of the conspiracy arc in the third season [probably in the nick of time], creator Nix has given the show a slightly different feel. Whereas Michael could work various cons against the characters he’s faced up ‘til now, that option is unavailable with Marks. This gives the series more of a sense of stakes. Not only must Michael help others, but he has to find a way to deal with such distractions as police staking out his weapons caches [as just one example]. The result is a show that seems even smarter, sharper and more character driven than before.

Some other shifts find Sam living in the Westen house and working to repair the sun room he blew up last season. Because of this, we get a lot more Sam/Madeline [Sharon Gless] action. Given the chemistry that Campbell and Gless have – and their ability to turn on a dime from dramatic to comedic – this is an inspired move, especially as Gless and the writers have made Maddy less annoying as the show progresses. Michael’s on-and-off girlfriend/colleague Fiona [Anwar], of course, still chooses “blow things up” as her first option, making the changes in season three even more intriguing.

Burn Notice still looks great and has that comedy/drama mix that we’re used to – it’s just that the sources for each are being developed a bit differently. It’s not a full scale reinvention, but Burn Notice is not quite the same and, in this case, change is good.