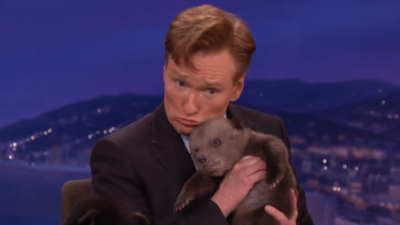 Conan O’Brien is taking his late-night talk show on the road again – CONAN will broadcast live from the iconic Apollo Theater in New York from Monday, October 31st to Thursday, November 3rd.

The New York shows will feature a guest list of big names like Louis C.K., Ryan Reynolds and Tracy Morgan.

In addition to the nightly shows, Team Coco will be live-streaming on Instagram and Snapchat every day from inside the Apollo Theater, providing a behind-the-scenes look at the making of the shows. For details, follow the jump.

TBS‘s late-night show CONAN will be heading back to New York City for the first time since 2011 for a week of shows airing Oct. 31 – Nov. 3. Joining host Conan O’Brien during the week will be special guests Louis C.K., Ryan Reynolds and Tracy Morgan, along with comedian Rory Scovel, the band The Sugar Hill Gang and more. Taped at Harlem’s legendary Apollo Theater, the week of episodes will kick off the beginning of CONAN‘s eighth year on TBS, a division of Turner. It will also continue O’Brien’s string of innovative road show broadcasts from cities across the United States and around the globe.

The preliminary schedule for CONAN in NYC is included below, with additional guests and musical performances to be announced soon:

In addition to the nightly shows, Team Coco will be live-streaming on Instagram (www.instagram.com/teamcoco) and Snapchat (www.snapchat.com/add/teamcoco) every day from inside the Apollo Theater, providing a behind-the-scenes look at the making of the shows.

CONAN in NYC marks the show’s sixth out-of-the-studio trip in the past 18 months and its second excursion to New York. Previous trips have taken O’Brien overseas to North Korea, Armenia and the United States Air Force Base in Doha, Qatar, where he was accompanied by First Lady Michelle Obama. In spring 2015, O’Brien made headlines as the first American late-night host to shoot in Cuba in more than 50 years. During its eight seasons on TBS, the Los Angeles-based CONAN has also been broadcast from such U.S. cities as Chicago, Dallas, Atlanta and, for the past two years, San Diego during Comic-Con® International.