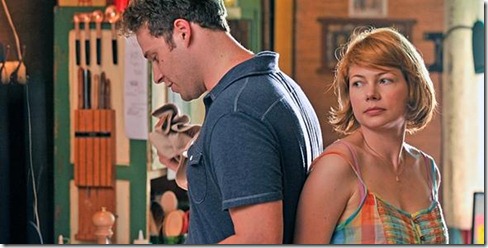 Sarah Polley’s first film, Away from Her, won her an Oscar® nomination for best screenplay. Take This Waltz, about a married woman who finds herself in love with two men and has to make a choice, will probably not.

Margot (Michelle Williams) is a freelance copywriter who meets Daniel (Luke Kirby) while attending a historical re-enactment in Nova Scotia. He eggs her on when she’s persuaded to take part in the re-enactment and that intrigues her.

Shortly thereafter, they find themselves sitting a seat apart on the flight home, to Toronto, where they both live – in a weird bit of happenstance bordering on the creepy, he lives across the street from her. They share a cab home where her last words to him are, ‘I’m married.’ His response? ‘That’s too bad.’

Though happily married to cookbook author Lou (Seth Rogen), Margot can’t get Daniel off her mind and winds up stealing off to hang out with him – finally wailing, in exasperation, ‘I want to know what you do to me!’

Before you know it, she’s left Lou and moved in with Daniel – where things are considerably more exciting (where did all those threesomes come from? They don’t seem to have anything to do with anything else in the film!).

Polley wrote and directed Take This Waltz and it is beautifully made. She uses a heightened pallet and pays loving attention to every little detail, right from the opening scene where Margot is baking what look to be quiches. Remember that scene – it pays off in a weird way later on.

The performances are all first-rate – even Rogen as the occasionally serious Lou. Williams has great chemistry with both Rogen and Kirby, making it difficult for the audience to side with either Lou or Daniel in the complex simplicity of their relationships.

There are details here that feel almost uncomfortably real – the baby talk between Lou and Margot; a scene in a women’s shower following an exercise class where Margot, her sister-in-law, Gerry (Sarah Silverman) and other women from the class – all sizes, shapes and colors – just talk – and others (see: threesomes) that feel like they were inserted almost randomly to provoke a response despite not really having much to do with anything in particular.

In fact, in spite of the moments of truth, the technical expertise and the performances, Take This Waltz never actually seems to say or mean anything. The result is a film that is mostly just a vague approximation of something – anything – real.