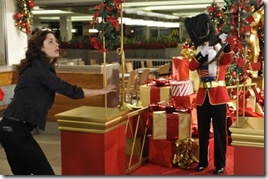 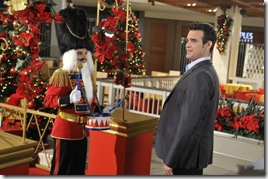 While Pete and Myka head off to figure out what artifact could be causing this surprisingly season-appropriate problem, Leena [Genelle Williams] shows Claudia an old photo of a happy Artie – sitting at a piano [it even has his initials scratched into it]. The ever industrious Claudia tracks the piano down and discovers it is owned by none other than Artie’s father [Judd Hirsch]! The two haven’t spoken in decades [W13 fans know why, of course] and inspiration strikes. Claudia decides to bring them together to work out their differences [and if a little white lie gets them together, she can live with that].

Meanwhile, Pete and Myka discover that the victim of the bad Santa is a workaholic who never has time for his daughter, Kallie [Jamie Bloch], because he’s too busy making money to give her everything she could ever want [and where have we heard that one before?]. In attempting to help Laurence Newley [Blackthorne], they learn that he makes a [very handsome] living by acquiring property and building malls. In speaking with his ex-wife, Lila [Kristi Angus], they learn that he’s missed every major event in Kallie’s life since just after getting the contract to build his first mall – which happened just after Christmas several years earlier.

In a really nice turn, the artifact is related to a famous Christmas truce that occurred during World War I – and the identity of the ‘bad Santa’ is definitely a shocker! Claudia’s brother, Joshua [Tyler Hines] also makes an appearance – and scores a funny scene with Artie.

For the most part, Secret Santa matches Eureka’s Oh Little Town for smart, heart-warming moments and mystery. The holiday arrangement of the theme music that accompanies the delightfully seasonal opening credits adds to the ep’s atmosphere. There is, however, an opening voiceover that is more than a bit precious.

Showrunner Jack Kenny directs from a script by Bob Goodman and, between the two, the result is that the slightly askew fun and intrigue of the series is not lost to cuteness or smarm. The pacing is a wee bit slower than usual, but not enough to feel like a different series. W13 fans will be pleased, and newcomers will find the ep a good place to try the show.