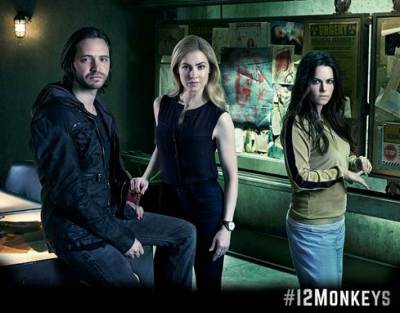 NEW YORK – October 9, 2014 – Syfy’s anticipated adventure thriller 12 Monkeys will make its series premiere on Friday, January 16 at 9pm ET/PT.  Inspired by the classic blockbuster film, which commemorates its 20th anniversary next year, 12 Monkeys explores the provocative story of a time traveler from a decimated future in a high-stakes race against the clock. Utilizing a dangerous and untested method of time travel, he journeys from 2043 to the present day on a mission to locate and eradicate the source of a deadly plague that will all but annihilate the human race. The series is produced by Universal Cable Productions in association with Atlas Entertainment, producer of the original theatrical film.

Syfy and Universal Cable Productions will uncage 12 Monkeys at New York Comic Con this weekend, with a panel on Saturday, October 11 at 5pm ET headlined by series producers Natalie Chaidez, Terry Matalas and Travis Fickett.  Series star Hampshire also stops by to discuss her role, which was portrayed by Brad Pitt in the original feature film.  Her character is the show’s wild card, a brilliant and unpredictable mental patient who may or may not be tied into the Twelve Monkeys’ conspiracy to destroy the world with a virus.

Atlas Entertainment’s Charles Roven (American Hustle, Man of Steel, The Dark Knight Trilogy) and Richard Suckle (American Hustle, The International), will executive produce. Roven served as producer on the original film. Jake Kurily will serve as Atlas’s producer on the series. Natalie Chaidez (In Plain Sight, V, Heroes) is the executive producer/showrunner and Terry Matalas & Travis Fickett (Nikita), who co-wrote the pilot, will serve as Co-Executive Producers.  12 Monkeys is produced by Universal Cable Productions in association with Atlas Entertainment.

Atlas Entertainment, led by founder Charles Roven, produces blockbuster films as well as critically acclaimed features. Atlas Entertainment’s films have generated billions of dollars in revenues. Atlas is currently in production on the highly anticipated feature film Batman v Superman: Dawn of Justice for Warner Bros directed by Zack Snyder set for release on March 25, 2016. Also upcoming, Atlas Entertainment is in post-production on Duncan Jones’ Warcraft from Legendary Pictures and Universal Pictures with a March 11, 2016 release. Atlas Entertainment is also filming the Syfy series 12 Monkeys, a drama series based on the 1995 Universal Pictures film directed by Terry Gilliam and produced by Charles Roven’s Atlas Entertainment, slated to premiere January 2015. The Atlas team most recently collaborated with David O. Russell on the critically acclaimed box office hit American Hustle which has grossed more than 250 million dollars in worldwide box-office.  Among its many accolades, the film won 3 BAFTA awards, was nominated for 10 Academy Awards ® including a Best Picture nomination for Atlas’ producers Charles Roven and Richard Suckle.  It also received seven Golden Globe® nominations, winning 3 including Best Motion Picture – Comedy or Musical.