The Duffer Brothers have announced the start of production on Stranger Things 4 – with a clip containing an unnerving revelation: David Harbour’s Hopper is alive! (But not in a good place right now…) 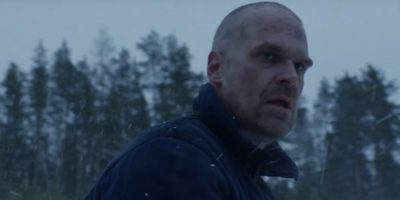 “From Russia With Love…”

“We’re excited to officially confirm that production on Stranger Things 4 is now underway — and even more excited to announce the return of Hopper! Although it’s not all good news for our “American”; he is imprisoned far from home in the snowy wasteland of Kamchatka, where he will face dangers both human…and other. Meanwhile, back in the states, a new horror is beginning to surface, something long buried, something that connects everything….

Season 4 is shaping up to be the biggest and most frightening season yet, and we cannot wait for everyone to see more. In the meantime — pray for the American.”

From Russia with love,
The Duffer Brothers