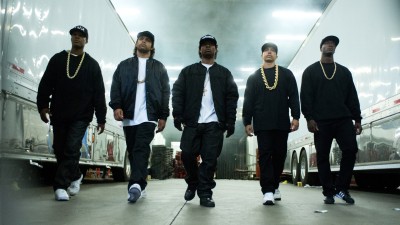 F. Gary Gray’s Straight Outta Compton is a pretty straightforward recounting of the rising of hardcore rappers N.W.A. – and their almost equally speedy disintegration. It also whitewashes an important aspect of the group’s life in the early days – the over the top misogyny – while being very open about a member’s death from AIDS-related health issues.

Even with its omissions, it’s a powerful statement about the perils of becoming too big too quickly and not paying attention to details – while being scarily relevant to race-based problems that are still ongoing. Even someone as far out of the targeted demographics as I am, can see and feel all of that.

The first half of Straight Outta Compton deals with the manner in which the members of N.W.A. (N****s With Attitude) come together – Dr. Dre (Corey Hawkins) moving out because his mother wants him to get a real job and makes (very) light of his DJing, for example) – and put together songs that reflect the life that they see around them in Compton.

A self-released album does well, locally, for them and they come to the attention of Jerry Heller (Paul Giamatti) and find themselves on a real label, however small, and touring to huge crowds and much acclaim (not to mention partying). In the meantime, the group’s members get contracts that are a foot-thick and filled with legal jargon – and sign without bothering to check into the details (Jerry tells them that lawyers will just try to scam them). Except for Ice Cube (O’Shea Jackson Jr. – Cube’s real-life son and a dead ringer for his dad), who leaves the group.

Then comes the feud between Cube and Easy-E (Jason Mitchell) – a feud played out in the rhymes on their albums – the slow build of problems for E and his label and the disintegration of the group as Dre leaves to start a new label with Suge Knight (R. Marcos Taylor), as scary a guy as you’ll see in a movie this year. 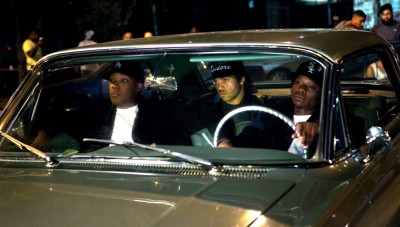 Through the rise and disintegration of N.W.A., the growth of the individual members of the group during and afterward – and all the details in between – there’s enough material to fill out a book or two, so the absence of Dre’s beating of Dee Barnes and the lack of remorse (or the rest of the group’s support for Dre) might be seen as something that was cut for time (Straight Outta Compton is two-and-a-half hours long already).

Unfortunately, that’s a story that made the news even up here in the Great White North, so it’s hardly an inessential part of their history – though I suppose the partying sequences do kind of hint at the band’s misogyny so it’s not like it was completely erased from the movie. I’m not sure that’s balanced out by the group’s (rightly) principled stand on the First Amendment in regard to their epic/legendary F*** Tha Police, or E’s battle with AIDs.

Whatever the case, Straight Outta Compton might have some flaws in regard to what got edited out of the story, it’s still a compelling film with terrific performances and some great songs. It’s hard not to be moved when you see what prompted Cube to generate those rhymes.

Music aside, I’m not sure Straight Outta Compton is a movie that you enjoy, exactly, but it is certainly one that carries an emotional impact and recounts an engrossing story with far too many elements that are unfortunately still with us – including cops getting off murder charges with film available that clearly shows them to be guilty as hell.

It’s too bad that Straight Outta Compton is timely – the sad thing is that it might still be timely a decade from now. What’s great about it is that it will probably never lose its power – even after it ceases to be timely. That’s because it is a great film.