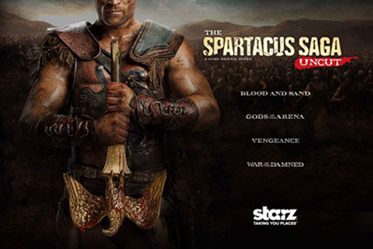 Beginning October 26th, Starz is setting its premiere series, Spartacus – from Blood and sand to War of the Damned – in a special Spartacus Uncut presentation featuring footage previously only available on the Blu-ray sets. Spartacus Uncut will be hosted by Liam McIntyre, who played Spartacus  for of the series’ run.

For more details – and the complete schedule – check out the press release following the jump.

STARZ PRESENTS “THE SPARTACUS SAGA: UNCUT” RELIVE THE GLORY OF THE BROTHERHOOD – FROM BEGINNING TO END

Beverly Hills, Calif., October 3, 2013 – Legions of fans have spoken, and STARZ has answered the call! The entire “Spartacus” series will be rebroadcast beginning Saturday, October 26th with “Blood and Sand.”  Fans will be able to binge view multiple episodes every week, and will also be treated to bonus footage previously available only on the Blu-Ray discs.

Liam McIntyre will host each evening, offering his insights into each of the episodes from “Blood and Sand”, “Gods of the Arena”, “Vengeance” and “War of the Damned.”

“Spartacus” averaged up to six million viewers per episode over the course of its highly acclaimed and successful four year run on the network. Additionally, it is an international smash, airing in over 150 countries and translated into more than 15 languages.

“Spartacus” continues to be extremely popular in social media. In addition to over 3.5 million Facebook followers, the post-season engagement levels have at times outperformed conversations during the series run earlier this year.

For a sneak peek: http://www.starz.com/originals/spartacus/Videos/#/the-spartacus-saga-uncut-trailer—tvma-version

For those feeling particularly gluttonous, all 39 episodes of the series will be available on Starz on Demand and Starz Play beginning October 26th.

The House of Batiatus, a gladiator training camp, is on the rise, basking in the glow of its champion Gannicus. A young Batiatus, with his loyal wife Lucretia by his side, is ready to overthrow his father and betray anyone to keep his gladiators in demand. But when Batiatus falls on hard times, it will take a gladiator greater than current champion Crixus to turn his fortunes around. When a Thracian slave named Spartacus arrives, Batiatus senses greatness. Under the watchful eye of gladiator trainer Doctore, Spartacus rises through the ranks to become the new champion. However, when Spartacus discovers that his wife Sura has been killed, he plots to avenge her death and free every slave; a bloody escape ensues. Gaius Claudius Glaber, the Roman responsible for bringing Spartacus and his wife into slavery, sends troops to crush the slave army. But Spartacus, with a rebellion swelling to thousands of freed slaves, becomes a force mightier than Rome had ever imagined. The Roman Senate turns to Marcus Crassus, a wealthy, strategic politician, for aid. With a young Julius Caesar as an ally, Crassus must crush the rebellion. And one final, bloody battle will be unleashed; a battle unlike anything ever seen before in the history of the Republic.

The back to back playoff will run as follows:

October 26th-  Beginning at 10:05pm (immediately following Episode 2 of  “Dancing on the Edge”)

November 2nd– Beginning at 10:05pm (immediately following Episode 3 of “Dancing on the Edge”)

November 9th– Beginning at 10:05pm (immediately following Episode 4 of “Dancing on the Edge”)

November 16th– Beginning at 10:35pm (immediately following  Episode 5 of “Dancing on the Edge”)

November 23rd– Beginning at 10:05pm (immediately following  the epilogue of “Dancing on the Edge”)

“Spartacus: Blood and Sand” episode: Kill Them All

“Spartacus: Gods of the Arena” episodes: Past Transgressions; Missio

“Spartacus: Gods of the Arena” episodes: Paterfamilias; Beneath the Mask; Reckoning

“Spartacus: Gods of the Arena” episode: The Bitter End

“Spartacus: Vengeance” episodes: Fugitivus; A Place in This World

“Spartacus: War of the Damned” episodes: Enemies of Rome

“Spartacus: War of the Damned” episodes: Wolves at the Gate; Men of Honor; Decimation

“Spartacus: War of the Damned” episodes: Separate Paths; The Dead and the Dying; Victory