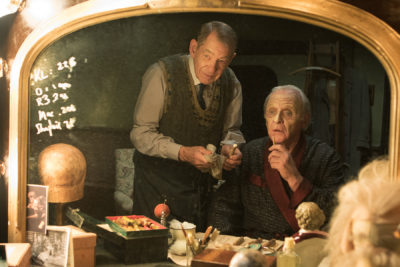 During a Nazi bombing, a small theatre company is about to live up to the old saying, the show must go on, with their nightly performance of King Lear. Only Sir, their Lear has wandered off – leaving his dresser, Norman, in a bit of a quandry because even if Sir arrives in time to go on, he might not be all there.

The Dresser premieres on Starz on Maonday, May 30th (9/8C). For more, follow the jump.

“The Most Wonderful thing in life is to be remembered.”
– Sir

“the dresser” premieres monday, may 30th at 9pm et/pt on starz

One fateful night in a small English regional theatre during World War II, a troupe of touring actors stage a production of Shakespeare’s “King Lear.” Bombs are falling, sirens are wailing, the curtain is up in an hour but the actor/manager ‘Sir’ (Anthony Hopkins) who is playing Lear is nowhere to be seen. His dresser ‘Norman’ (Ian McKellen) must scramble to keep the production alive but will Sir turn up in time? And if he does, will he be able to perform that night?

“The Dresser” is a wickedly funny and deeply moving story of friendship and loyalty as Sir reflects on his lifelong accomplishments and seeks to reconcile his turbulent friendships with those in his employ before the final curtain.

“The Dresser” premieres on Monday, May 30th at 9PM ET/PT on STARZ.