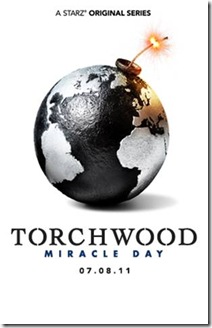 New York, May 17, 2011 — Imagine a day when nobody dies.  All across the world, nobody dies.  And then the next day, and the next, and the next, people keep aging.  They get hurt and sick but they never die.  This is the extraordinary premise of the highly-anticipated STARZ original drama series, "Torchwood: Miracle Day," produced by BBC Worldwide Productions for STARZ, BBC Cymru Wales and BBC Worldwide.  The series will premiere on STARZ July 8 at 10 pm ET/PT.

"Torchwood: Miracle Day" begins with a day when nobody dies. The result: a population boom, overnight. With all the extra people, resources are finite. It’s said that in four month’s time, the human race will cease to be viable. But this can’t be a natural occurrence – someone’s got to be behind it. It’s a race against time as C.I.A. agent Rex Matheson investigates a global conspiracy.  The answers lie within an old, secret British institute. As Rex keeps asking "What is Torchwood?," he’s drawn into a world of adventure, and a threat to change what it means to be human, forever.