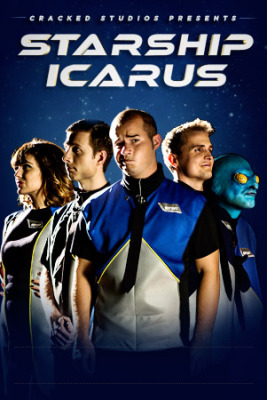 Star Trek (any iteration), Star Wars – when you watch a movie or TV show where a crew of intrepid folks explore the vast reaches of space, have you ever wondered about the crew who keep those starships, space stations or what have you working on a day to day basis?

Babylon 5 spent one episode of its five-year run on them and John Scalzi’s novel Redshirt paid slightly more attention to them than most – but now, the finely disturbed minds at Cracked.com have devoted a webseries to them.

Written by John Pargin (John Dies at the End) and Michael Swaim, Starship Icarus is their story. The series premiere, The Ridiculous Reality of Life in Space: Starship Icarus, is now up. Follow the jump for details.

Los Angeles (Oct. 6, 2014) – Cracked.com, one of the United States’ longest-running humor institutions and home of the Webby Award-winning series After Hours, today announced its newest project from Cracked Studios: Starship Icarus. The four-episode web series, written by the New York Times best-selling author of John Dies at the End, Jason Pargin (aka David Wong), and Michael Swaim, will premiere Oct. 6.

Starship Icarus follows the ragtag IT department of a Federation-class starship as they struggle with their daily duties and the unfathomable unknowability of deep space.

“Our goal with this new series was to create something unique on the Internet, in that it is both extremely ambitious and also very, very ridiculous,” Pargin said. “We’re hoping Starship Icarus transforms the medium of serialized web content forever, or at least keeps everyone entertained for several minutes.”

Launched in 2006 by Editor-in-Chief Jack O’Brien, Cracked.com is one of the most visited humor websites on the Internet, and one of the fastest-growing brands in humor. The site features original articles created daily from a team of highly talented writers, comedians and Cracked fans. In January 2014, Cracked.com launched Cracked Studios as a destination for new and original series designed for the burgeoning digital marketplace. The studio is now home to the Webby Award-winning series After Hours, as well a slate of new narrative miniseries, which are released once a month. Whether through its engaging nonfiction humor articles containing some of the most insightful pop culture observations, original video series, or up-and-coming comedy troupe showcases, Cracked.com keeps its audience smiling, laughing and sharing the funny, weird and outlandish takes on our culture.