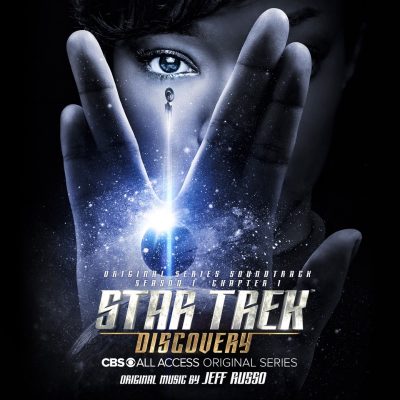 Available Digitally, With CD and Vinyl Album Following in Early 2018

Dec. 5, 2017 – CBS Television Studios announced today the release of the original score of the CBS All Access series STAR TREK: DISCOVERY, which premiered earlier this fall.

“Grand, glorious, hopeful, heartbreaking, intimate, bittersweet, tense, soaring, surprising. Over 51 years, in its many iterations, there’s been no shortage of adjectives to describe the music of Star Trek,” said co-creator Alex Kurtzman. “On the other hand, the list of composers capable of capturing them all is short, and this is where Jeff Russo comes in. Jeff manages to hold each note in beautiful balance, evoking the nostalgia of Alexander Courage’s original theme while scoring Discovery with his own unique ear and heart. We’re lucky to have him, and we hope you’ll love his music as much as we do.”

“The producers and I talked a lot about telling this story from an emotional point of view,” explained Russo. “Relationships play a big role in this incarnation of the series, so trying to be true to that and create themes that connect characters is important.”

ABOUT STAR TREK: DISCOVERY:
STAR TREK: DISCOVERY follows the voyages of Starfleet on their missions to discover new worlds and new life forms, and one Starfleet officer who must learn that to truly understand all things alien, you must first understand yourself. The series features a new ship and new characters, while embracing the same ideology and hope for the future that inspired a generation of dreamers and doers.