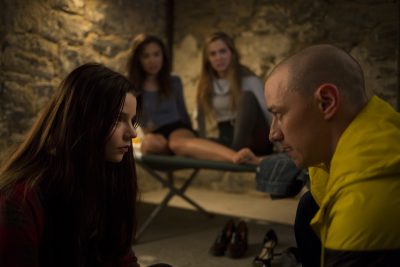 It’s the wrap-up at Claire Benoit’s (Haley Lu Richardson (The Edge of Seventeen) birthday and Claire and her best friend Marcia (Jessica Sula, Recovery Road) are waiting impatiently for Claire’s dad (Brian Gildea) to drive them home from the restaurant. He refuses to leave until troubled girl and mercy invite Casey Cooke’s (Anya Taylor-Joy, Morgan, The Witch) ride arrives – and when it doesn’t he decides to give her a ride.

The girls get into the car while Claire’s dad stows her presents and doggie bags (boxes, really) in the trunk. 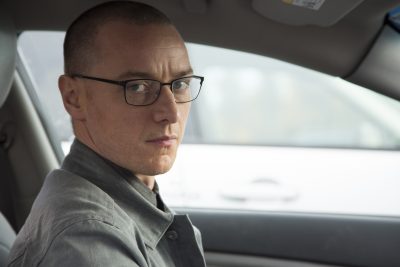 The car door opens and it’s not Claire’s dad who gets in – neither Claire nor Marcia notice because they’re talking and texting, but Casey sits there in shock as he sedates them. When she tries to get out of the car, she too is sedated.

The three wake up in a windowless room.

The kidnapper is revealed to be a man called Dennis (James McAvoy) – but we learn in short order that Dennis is one of many characters who inhabit this man’s mind. There’s Patricia (a stern but decent seeming lady), Hedwig (a nine-year old boy) and Barry, whom we meet when he makes an unplanned visit to his therapist, Dr. Karen Fletcher (Betty Buckley, OZ, Law & Order: SVU).

From there, Split proceeds on three timelines: the girls in captivity, Dr. Fletcher’s therapy sessions with Barry, and Casey’s memories of when she was little. Through Casey’s memories, we learn things that are extremely disturbing – but they also give us reason to believe that she is very strong and capable person.

Eventually, we meet a few more of Dennis’ 23 identities – and that he/they is/are parts of the fractured identity of someone named Kevin. Also that Dennis and Patricia believe in something called The Beast. The girls are secret food upon which The Beast will dine when he arrives. 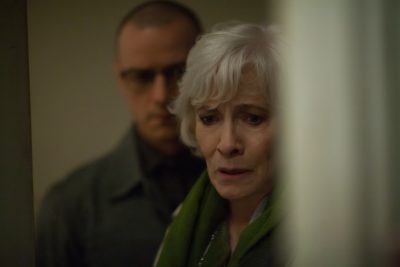 Split unfolds like a Hitchcock thriller – we gradually learn more about Casey, Dennis/Patricia/Hedwig and Dr. Fletcher as the girls try, unsuccessfully, to escape. There are subtle Hitchcock quotes in some shots that add a certain edge, as well (think stairwell and Vertigo, for example – though the big one is Patricia, who reminds of Psycho).

Though Claire and Marcia might be the popular girls at school, it is (of course) the troubled Casey who shows her intelligence quickly – refusing to commit to rash action before she has some idea of what’s going on. In a scary/disturbing scene, she tells Claire to ‘Behave!’ as Dennis pulls her from the room.

Soon the girls are separated – escaping turns out to be extraordinarily difficult – Dennis has clearly planned very well.

Shyamalan has done his homework – through Dr. Fletcher we learn a great deal about Dissociative Identity Disorder (multiple personalities are usually caused by some kind of trauma in childhood; DID sufferers can exhibit different habits, handwriting and even physical traits – in one of Fletcher’s cases one identity has high cholesterol but none of the others do). 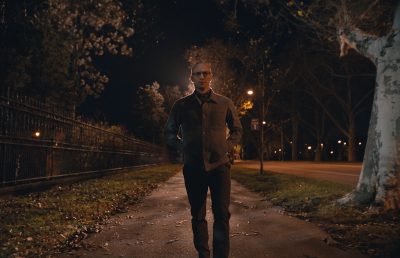 McAvoy is amazing throughout the film – his performance is a masterclass in acting, especially when, near the end of the film, he shifts from personality to personality without any cuts or shifts in camera angles. It’s quite astonishing to watch.

Taylor-Joy is also extremely good as Casey – she lets us see her inner turmoil while seeming almost calm. When she does act, we can see her fear, and the effort it takes to overcome that fear to take action.

The thing Shyamalan does that makes Split work so well is that he has learned the rules, so to speak, in order to break them – or at least bend/expand upon them to an insane degree. Within the bounds of the film, everything makes complete sense.

Like Shyamalan’s best films, there is a twist here – but it has nothing to do with the actual ending of the movie. As the closing credits begun to run, there’s an eighteen second scene that changes everything we’ve seen. If you get it – and think about it – it makes complete sense but if you leave too soon, you’ll miss it.