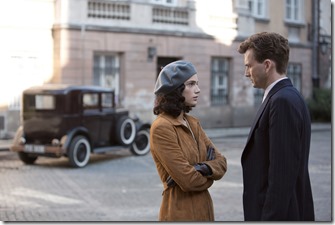 Spies of Warsaw (Wednesday, April 3 &10, 9/8C) is one of BBC America’s best Dramaville presentations. The two-part miniseries, based on the acclaimed novel by Alan Furst, is a complex, tension-packed take on the espionage heavy period immediately preceding World War II – from 1937 and 1939 – mostly in Warsaw, with brief periods in France and Poland.

There are more characters and plot arcs in Spies of Warsaw than in almost anything else currently on TV – with the possible exception of Game of Thrones. The main character and protagonist is Colonel Jean-Francois Mercier (David Tennant, Doctor Who, Blackpool, Hamlet), a minor French aristocrat (a chevalier, in fact) who was WWI hero and now works for France’s military intelligence. He gathers intelligence strongly suggesting Germany is planning to invade France and Poland in a particular manner – his colleagues disagree.

The female lead, Anna Skarbek (Janet Montgomery, Entourage, Black Swan), is a lawyer for the League of Nation’s (The United Nations’ predecessor) who is set up with Mercier for an official party and finds herself drawn to him despite her living with a Russian expatriate journalist (Piotr Baumann).

One of the great things about spies of Warsaw is that it makes use of the convention that there’s not much that’s secret among members of the intelligence community – and there are spies everywhere. Here, there are spies from France, Poland, Russia and Germany – most of whom know more about their friends and foes than any of them would like.

Unlike most of colleagues, Mercier is far more personally involved in his work – when he shepherds a communist couple – Viktor (Alan Corduner) and Malka (Linda Bassett) – through their defection from the Stalinist purges, he is appalled by the way they are left to their own devices after his people are done with them. He’s a bit out of his time – a true gentleman when such men are becoming more and more scarce. 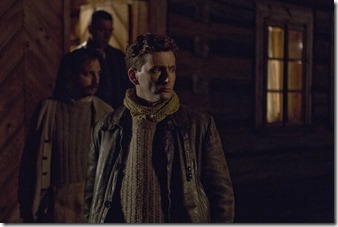 Even amongst his own, Mercier is never at home – his immediate superior, Jourdain (Burn Gorman (Torchwood, The Dark Knight Rises), is a petty man whose jealousy of his ability and approval from higher ups cause him to do some equally petty and vindictive things.

The first night of Spies of Warsaw sets up the situations and arcs that build some harrowing moments – and some very romantic (in every sense of the word) ones – as events unfold in a very measured way. There’s even a very ‘heist movie’ arc that adds to the tension in the second night.

Spies of Warsaw was adapted for television by Dick Clement and Ian La Frenais – who partnered to write Across the Universe, The Bank Job and several episodes of Lovejoy. They make the plot’s many arcs fit together in a way that, under the direction of Coky Giedroyc (Blackpool, Sherlock, The Hour), builds tension with deliberate pacing, brief flurries of action and giving its characters more layers than you might expect.

David Tennant and Janet Montgomery have a crackling kind of chemistry that makes their relationship a supercharged affair (you will forgive Montgomery for Made in Jersey!). Gorman makes Jourdain an officious twit that we can love to hate, and Tuppence Middleton does a lovely job as Mercier’s much younger sister, Gabrielle – a gently wilful young woman who definitely knows her own mind (and heart).

Julian Glover (Game of Thrones) is delightful as General Beauvilliers, one of Mercier’s supporters above Jourdain’s pay grade – he’s simultaneously crusty and charming. Miroslaw Zbrojewicz (Boys don’t Cry) is also worthy of note for his work as Mercier’s driver/bodyguard/colleague, Marek. And Fenella Woolgar is deft as the surprising Lady Angela Hope – a seemingly frivolous ‘woman of a certain age’ who has unexpected friends.

Spies of Warsaw might seem to move a bit more slowly than we’re used to, but its depth and suspense more than make up for that, but it takes historical events and seeds them with interesting fictional characters in a way that will keep you on the edge of your seat – while you might be learning about some pretty cool stuff.