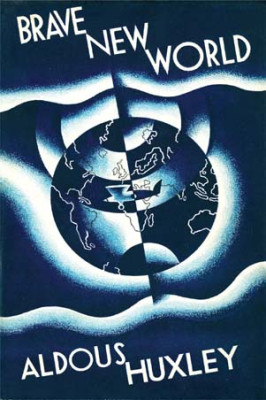 Syfy and Amblin previously collaborated on Steven Spielberg Presents: Taken, which won a 2003 Emmy® for Best Miniseries, as well as nominations in six other categories.

Brave New World is set in a world without poverty, war or disease. In this world, humans are given mind-altering drugs, free sex and rampant consumerism are the order of the day, and people no longer reproduce but are genetically engineered in “hatcheries.” Those who won’t conform are forced onto “reservations” – until one of these “savages” challenges the system, threatening the entire social order. First published in 1932, Brave New World was ranked fifth among the 100 best English language novels of the 20th Century by Modern Library.

Said Dave Howe, President, Syfy & Chiller: “Brave New World is one of the most influential genre classics of all time. Its provocative vision of a future gone awry remains as powerful and as timeless as ever. Promising to be a monumental television event, Brave New World is precisely the groundbreaking programming that is becoming the hallmark of Syfy.”

Darryl Frank and Justin Falvey of Amblin Television (The Americans, Falling Skies, Under the Dome) will be executive producers. Les Bohem (Steven Spielberg Presents:Taken) will write the screenplay and also executive produce.

Universal Cable Productions will serve as the studio.

“We’ve been looking for an opportunity to reunite with Les, Bonnie Hammer and Dave Howe, ever since our collaboration on Taken over a decade ago, and Brave New World is just the project we’ve been waiting for, to bring the band back together,” said Darryl Frank and Justin Falvey, Co-Presidents, Amblin Television. “We’re thrilled to be working with Dawn Olmstead, with whom we produced The Whispers for ABC, and under the leadership of Jeff Wachtel and Universal Cable Productions, we know the project is in just the right hands.”

“Brave New World is science fiction at its best – a brilliant, poignant story that continues to fascinate and illuminate,” said Jeff Wachtel, President and Chief Content Officer, NBCUniversal Cable Entertainment. “And there is simply no better team than Amblin to bring this exquisite project to life.”

Amblin Television currently produces six series, airing on four different networks – “The Whispers,” premiering this summer on ABC; “Under the Dome” and “Extant,” returning for third and second seasons, respectively, on CBS this summer; “The Americans” on FX, which was recently renewed for a fourth season; and “Falling Skies,” which will be back for a fifth and final season this summer on TNT, along with the upcoming new TNT drama from Ed Burns, “Public Morals.”