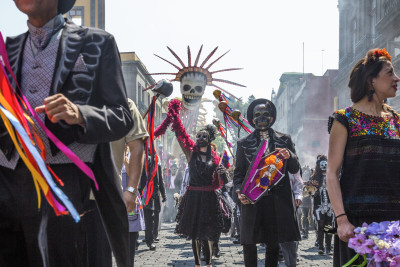 The Day Of The Dead parade is recreated in Mexico City for Metro-Goldwyn-Mayer Pictures/Columbia Pictures/EON Productions’ action adventure SPECTRE.

One of the most important parts of Daniel Craig’s time in the James Bond series is the way has evolved ever-so-slightly from a thug with a licence to kill into a man who knows when not to kill. Another is the way that we’re getting to see bits and pieces of Bond’s life the way they’ve formed the man.

Spectre brings Bond into conflict with the titular group, but even more, with its head, Franz Oberhauser – a man who has been thought dead for decades. To make things even more significant – and personal – the two know each other from when Bond was a boy.

The threat, this time out, is the perversion of communications in a way that makes the NSA look like grade school children who have never seen a computer. Spectre has arranged a network that will monitor – and control if necessary – the intelligence of nine major nations’ national security organizations.

The film opens with Bond in Mexico, tracking Marco Sciarra (Alessandro Cremona) – a man who is planning a terrorist act that would make 9/11 look puny by comparison. This takes place on the Day of the Dead, so there are revellers everywhere and Bond’s (Craig) acts lead to a few deaths and a lot of damage, which gets him called on the carpet by M (Ralph Fiennes) when he returns to London.

He is informed that MI5 and MI6 are merging and the head of MI5, whom Bond will refer to as C, has been lobbying for an end to the double-oh program as an outdated, inefficient use of government backing. C is played by Andrew Scott – better known as Moriarty to millions of fans of Sherlock – so there’s built in audience distrust that’s increased by C’s arrogance and condescension.

Although Bond tells M he was in Mexico for some downtime, he tells Moneypenny (Naomie Harris) he had another reason – and plays her a video from M’s recently deceased predecessor (Judi Dench).

In following the previous M’s instructions, Bond finds his way to a man called the Pale King (Jesper Christensen), who has been terminally poisoned by radiation – and whom Bond has to convince to provide him with information. His promise to protect the man’s daughter, Dr. Madeline Swann (Lea Séydoux) gets him the information. 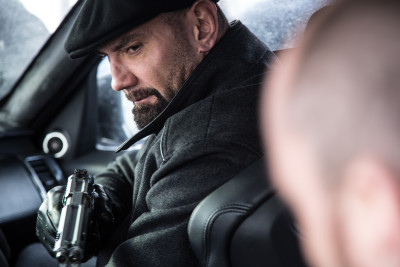 Meanwhile, on another track, a board of directors is dealing with worldwide crime – and a man who has been charged with The Pale King’s death is rather abruptly destroyed and replaced by a large, quiet man called Mr. Hinx (Dave Bautista).

Now both Bond and Mr. Hinx are after Swann and things get interesting.

As we’ve seen in trailers, Oberhauser (Christoph Waltz) claims to have been behind every single incident that brought pain to Bond – each villain he’s faced so far; the death of every woman he’s cared about – and he’s so matter of fact about it that we believe him completely.

As with Skyfall, much of Spectre is given over to character moments – it’s important to director Sam Mendes that Bond be shown as human, and shown to have vulnerabilities as well as strengths. There’s a clever bit of character building that occurs in the verbal sparring matches between M and C, too – we see M’s sense of honor and order and C’s inability to care about people either as individuals or collectively. Oberhauser’s surface charm doesn’t really cover his lack of empathy or honor, either.

Q (Ben Whishaw) gets to do a bit more than usual this time out and that’s a good thing. He turns out to be resourceful in the field and a loyal friend and colleague under less than favorable circumstances.

The women of Spectre are a cut above the expected, too. From Skyfall, we know that Moneypenny is a tough cookie who can hold her own with Bond, but Sciarra’s fiery widow (an underutilized Monica Bellucci) many only be onscreen for a few minutes, but she’s memorable. 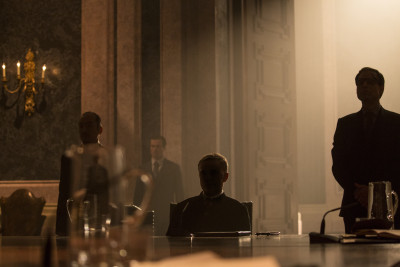 As for Swann, she’s a psychiatrist with a very expensive retreat for people who need her particular skills and insights. She makes no bones about finding Bond to be someone whom she can loathe – because she’s aware of her father’s trade and is quite correct in seeing Bond as someone who has some unhealthy similarities.

In between the character beats, there are some pretty effective action sequences – some more believable than others, but all to be expected in a Bond movie.

There’s also a lot of wit and humor, though no outright jokes (again, as in Skyfall, the humor is situational and the wit firmly driven by character). Gizmos are kept to a minimum – Bond’s Aston Martin was outfitted for 009 and doesn’t work quite the way he’s expecting, and the one gizmo he does get is a watch… that tells time. And has a very loud alarm…

As we’ve come to expect, the cinematography is superb, though not as moodily epic in Skyfall it is generally, pretty awesome.

There will be more Bonds, but between Skyfall and Spectre, Sam Mendes has raised the bar high. Should this be his last, his successors will be faced with the difficult task of creating Bond adventures that are also cinema. Good luck to them.