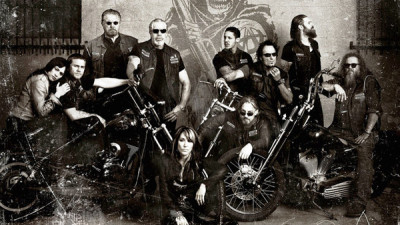 One of the most popular bikes driven by the SAMCRO members is the Dyna Street Bob, but the most popular Dyna in the club is easily Chib’s Harley-Davidson Dyna Street Bob. Many members of the club have a Dyna, but club president Chibs’ Dyna lacks the front fairing that other member’s bikes have. Built with custom black matte z-bars, Chibs’ Dyna has a small patch on the back of the saddle of Saint Andrew’s Cross that many fans of the series have even emblazoned on their own bikes. You’ll find a lot of discussion about this bike on various motorcycle forums and community pages.

Photo by Mattsmith569 via Wikimedia Commons

For many amateur riders, the Dyna Street Bob has an intimidating price tag starting at $13,000. But for those looking for a one-of-a-kind ride with both history and modern coolness, the Dyna is an amazing bike for the open road. “Triumph Bonneville IMG 2734” by Rama – Own work. Licensed under CC-BY-SA-2.0-fr via Wikimedia Commons.

With classic style and modern power, the Bonneville is the best of what most fans find appealing in the show—even if it is the ride of the law. Bonnevilles have inspired a love of bikes in people for decades, and it comes as no surprise that the Bonneville continues to enthrall modern audiences with its combination of classic styling, open power, and British cool.

Ridden by members of the rival bike club, the Mayans, the Softail is another classic American ride that has captured attention on film and television for decades. Featured in films as recently as “Captain America,” the Softail bikes are sleek beasts with enviable custom paint jobs. A classic bike with classic power, the modern Softail runs on an air-cooled Twin Cam 103B V-twin engine that can be seen working away from saddle. The Softail Classic takes everything that people loved about bikes from the ’50s and ’70s and reimagines it with all the power and agility of modern bikes for a killer combination. While the Mayans and SAMCRO may only have an uneasy truce, everyone can agree that the Harley-Davidson Softail is a beautiful bike whether it is a modern or classic model. Photo by Liftarn via Wikimedia Commons