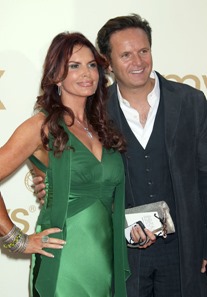 HOLLYWOOD, CA (April 25, 2014) – Mark Burnett and Roma Downey (Son of  God) have joined Metro-Goldwyn-Mayer Pictures and Paramount Pictures’ Ben-Hur, it was announced today by Gary Barber, MGM’s Chairman and Chief Executive Officer and Paramount Pictures. The studios will co-produce the film, which is set for release on February 26, 2016. Burnett joins producers Sean Daniel (The Mummy Franchise) and Joni Levin (The Way Back), while Downey joins as an executive producer.

Timur Bekmambetov (Wanted) will direct the film.  The screenplay, originally written by Keith Clarke (The Way Back), with revisions by Academy Award®-winner John Ridley (12 Years A Slave), is based on Lew Wallace’s 1880 epic novel Ben-Hur: A Tale Of The Christ. Downey (The Bible) and John Ridley will serve as executive producers along with Keith Clarke and Jason F. Brown.

The film returns to the heart of Lew Wallace’s epic novel focusing on the nature of faith.  The story follows a falsely accused nobleman who survives years of slavery to take vengeance on his best friend who betrayed him.  Both must come to choose between retribution or forgiveness.

“We are thrilled to have Mark and Roma join the production team to bring such an indelible classic story to the big screen,” said Barber. “Their unrivaled passion, creativity and success in the faith based content space, will be a huge asset to the film and we look forward to working together.”

“A timeless film of this scale and scope requires an incredibly dedicated team of filmmakers and the opportunity to have visionary talents like Mark and Roma be a part of the making of the film, and knowing their incredible dedication to their own faith, made them the ideal partners to help bring this story authentically to life,” said Rob Moore, Vice Chairman Paramount Pictures.

"What an honor it will be to help bring this epic film back to the big screen" said producers Roma Downey and Mark Burnett.  "When Gary Barber allowed us to read John Ridley’s amazing script, we immediately knew we had to join this team.  We are thrilled to be ablework with Timur, Sean, John and the entire MGM and Paramount teams.  General Lew Wallace’s Ben-Hur is one of the most important Christian works of fiction ever written and this script is astounding.  It will be the most anticipated movie release of 2016."

MGM will handle production with Jonathan Glickman, President, Motion Picture Group and Matt Dines, Vice President, Production, overseeing the project on behalf of the studio. The film will be distributed worldwide by Paramount Pictures, with select international territories as well as all television distribution to be handled by MGM.

“It is an honor for us to be making a film based on such an epic story whose themes still clearly resonate,” said Glickman. “Together with our partners at Paramount, and this dream team of accomplished filmmakers, we are excited to introduce Ben-Hur to a new generation.”

Together Downey and Burnett were executive producers of The Bible series, which became the number one cable show for The History Channel of 2013.  In February 2014, 20th Century Fox released the feature film version Son of God.  The project entailed extensive outreach to the faith communities and consultation with biblical experts, to strong effect.  ADL National Director Abraham Foxman declared “Son of God is the most sensitive depiction of the story of Jesus that I have ever seen or probably will eversee.” Downey and Burnett are currently producing A.D. a new drama series for NBC and The Dovekeepers a four-hour miniseries on the story of Masada for CBS, both set to air in 2015.

MGM and Paramount are currently partnered on the upcoming Hercules, releasing July 25 as well as the sequel to Hot Tub Time Machine, releasing Christmas day. The studios previously teamed up on the release of GI Joe: Retaliation and Hansel and Gretel: Witch Hunters.

Metro-Goldwyn-Mayer is celebrating 90 years as a leader in the entertainment business and as an innovator in the industry. Today, MGM is an entertainment company focused on the production and distribution of film and television content globally. The company owns one of the world’s deepest libraries of premium film and television content.  In addition, MGM has investments in domestic and international television channels. For more information, visit www.mgm.com.

Celebrated Emmy-nominated actress and producer Roma Downey and her award winning husband producer Mark Burnett launched LightWorkers Media in 2011 with the children’s DVD and book series LITTLE ANGELS and its companion LITTLE ANGELS STORYBOOK BIBLE. LightWorkers Media produced the ten-hour hit miniseries THE BIBLE which was seen in the USA by 100 million people, was one of the fastest selling TV-to-Disc titles ever and was nominated for three Emmy awards.  Additionally they are producing the series A.D., a sequel to THE BIBLE series for NBC and they acquired Alice Hoffman’s award winning novel THE DOVEKEEPERS, which they are producing as a 4 hour mini series for CBS. In addition Roma and Mark have coauthored several books published by Faithwords. They are ambassadors for two children’s organizations OperationSmile and Compassion. LightWorkers Media is dedicated to shining a light and bringing uplifting content to people of all ages.