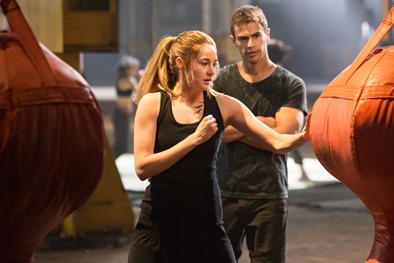 The next Next Big Thing is, apparently, Divergent, the movie based on the the trilogy of YA novels about a strictly regimented society that allows its citizens to be either brave, intelligent, compassionate, et cetera. At a certain age, every citizen is tested and assigned to a group representing and living that one facet of human personality – and she fails the test (or it just doesn’t work on her), making her a Divergent. Now she will have to learn why there is a plan to destroy all Divergents and, just maybe, save her society. Divergent will be in theaters March 21, 2014.

Check out the first trailer – and social media links – after the jump.

DIVERGENT is a thrilling action-adventure film set in a future where people are divided into distinct factions based on their personalities. Tris Prior (Woodley) is warned she is Divergent and will never fit into any one group. When she discovers a conspiracy to destroy all Divergents, she must find out what makes being Divergent so dangerous before it’s too late. Based on the best-selling book series by Veronica Roth. Kate Winslet, Maggie Q, Miles Teller, Tony Goldwyn, Ashley Judd, Zoe Kravitz, Jai Courtney, and Theo James also star.