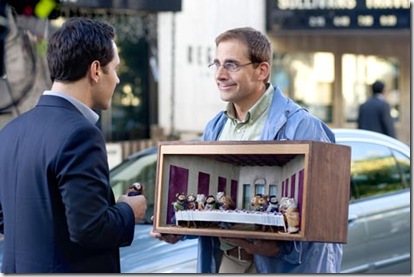 Of course, there must be a good reason for Tim to do something so mean-spirited – but the reason given [to impress his girlfriend] is one that only works for him. Julia [Stephanie Szostak] works in an art gallery and gives every indication of not being impressed by that kind of achievement. The miscommunication between them on this point is exploited, in the film, by Barry Speck [Steve Carell], a creator of historical dioramas inhabited by stuffed mice. He may work for the IRS, but his heart – and his art – is in taxidermy.

From the moment Tim and Barry meet – Tim almost runs him over when he dashes into the street to salvage a dead mouse before it can be run over – the spectacularly clueless Barry proceeds to destroy Tim’s life, beginning by mistaking Julia for a woman who has been stalking Tim for years and… I’ll say no more, except to add that Lucy Punch is amazing as Darla, the stalker from hell.

We know right from the film’s opening montage – a pair of hands lovingly constructing a complex park scene populated by stuffed mice to the accompaniment of The Beatles’ sweetly melancholy The Fool on the Hill – that Dinner for Schmucks isn’t going to be just another summer comedy. Instead, it’s a film that walks a couple of lines, balancing silliness with sobriety with feints in the direction of its mean-spirited original. 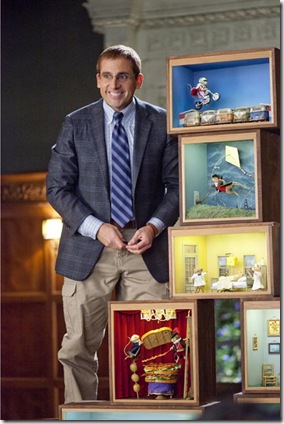 The key to Dinner for Schmucks is that Barry, no matter how clueless he may be, cannot be seen to be in on the joke. Carell plays him as a true innocent who has no filters and eagerly invests himself in the life of the man who appears to have just become his friend – his only friend, it turns out. The air of melancholy that drifts under the film’s comedy is mostly provided by Rudd, who knows that Fender’s [Bruce Greenwood] annual dinner is wrong on every conceivable level but still plans to attend, with Barry, solely out of ambition and despite his growing awkward affection for the amateur taxidermist.

By the time we get to the actual dinner, we know that the big event will be played out in ways that give new meaning to word havoc. We also suspect that the executives of Fender financial –who are the real idiots, anyway – will get their comeuppance. That’s not an actual spoiler – we’ve seen it coming from the moment the concept of the dinner was floated – but the manner in which this happens would be.

Directed by Jay Roach [Austin Powers, Meet the Parents] from a script by David Guion and Michael Handelman, Dinner for Schmucks is an odd confluence of events that coalesces into the funniest movie of the summer.

True, during the middle of the film, some gags go on several beats too long, and the pacing slips a bit, but with its strong first and last acts – and some inspired absurdities to keep us laughing, Dinner for Schmucks comes as a refreshing surprise: a comedy that is as smart as it is crazy, and as funny as it is heartfelt. You should stay to the end of the credits, too, for the revelation one last idiot.