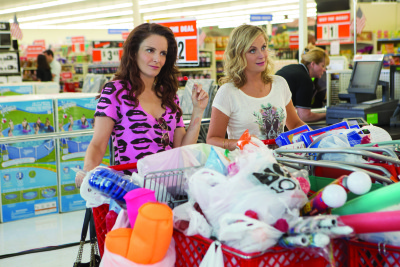 Sisters is one of the best crude-with-a-heart movies of the year – and the most subversive because the epic party being thrown isn’t through the efforts (and fantasies) of high school or college guys but a couple of middle-aged women.

It’s also great fun because its stars – Tina Fey and Amy Poehler – play against type (and, in fact play middle-aged versions of each other’s characters in 2008’s Baby Mama).

Kate (Tina Fey) and Maura (Amy Poehler) Ellis are middle-aged women who discover their parents (James Brolin, Dianne Wiest) have sold their childhood home and are being asked to clean out their old room. They do not take it well.

Maura is sister who always played it safe – she was the party mom for the legendary Ellis Island parties they threw in college), while Kate is still the same wild child she was back then – only she now has a college-age daughter, Haley (Madison Davenport, From Dusk Till Dawn: The Series).

Their room has apparently been left untouched since they moved out – there are Michael J. Fox and Xanadu posters on the walls and everything is pretty much where they left it.

Kate has been just been fired from another job (she’s a licenced hairstylist and manicurist) and her daughter has been away for the summer; Maura, the stable one, is Skyped by her parents who inform her their ‘thinking about selling the house and moving into a seniors’ community (they maneuver her into telling Kate – who won’t react any less well about the news but will be far more demonstrative). 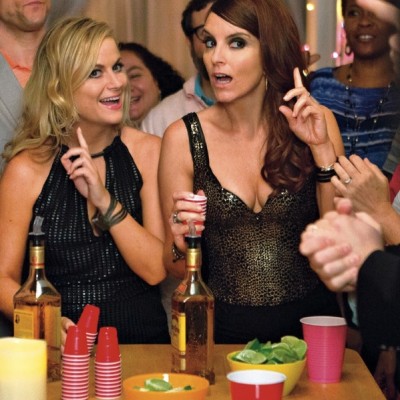 When the sisters arrive at their old home, there’s a ‘SOLD’ sign on the lawn. They are not impressed, but since it’s a done deal, they decide to throw one last Ellis Island party – only this time, Kate will be party mom while Maura let’s herself go – so she can hook up with the cute guy (Ike Barinholtz) she met earlier that day.

The party is pretty much what you would expect in an R-rated teen party movie except that everyone is over forty.

There’s the funny guy who arrives early and stays late (and isn’t actually funny); the couple who used to do it anywhere and everywhere but are now sedately married, with kids; the druggie who became an alcoholic (and owns a liquor store); the party crashing mean girl who used to besties with the sisters, and so on.

John Cena steals every scene he’s in as a stoic drug dealer who has a bit of everything for sale and is surprisingly sensitive; Maya Rudolph Makes mean girl Brinda a confused hot mess; and Davenport gives Haley’s bewilderment at her mom’s life touching.

There are other terrific performances, but those three seem to cover the sheer diversity writer Paula Pell (Saturday Night Live) and director Jason Moore (Pitch Perfect) are working with even before we get to Hae-Won (Greta Lee), the Korean manicurist Maura befriends, or the yuppie couple (Santino Fontana, Britt Lower) who’ve bought the house.

There are a lot of moving parts here, but they all act to showcase each sister’s discovery that the other is more than they thought they were – and that neither one has it any easier. The moment when the comedic havoc of the party turns dramatic only works because it flows so naturally from who the characters are and the chemistry between Fey and Poehler is so perfect.

Sisters runs a bit long, at a hair under two hours, but doesn’t unduly suffer because of it. As a savvy bit of counterprogramming to that big sci-fi opus, it’s genius.