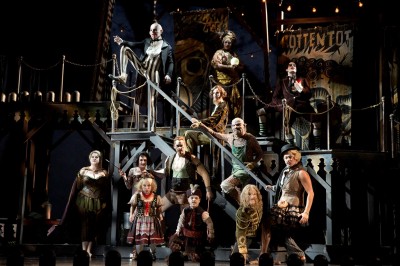 The award for one of the most unique, surreal musical theater experiences of the year has to go the gorgeously staged Kennedy Center production of Side Show : The Musical. This production is from the team that brought us Dreamgirls. Side Show features book and lyrics by Bill Russell and music by Henry Krieger, and is directed by Academy Award® winner Bill Condon. Sam Davis serves as musical director and arranger and conducts the Kennedy Center Opera House Orchestra and in a nice change of pace, the show is doing an extended residency, playing June 13 – July 14.

Set during the depression era, this true story follows the life of conjoined twins Violet (Erin Davie) and Daisy Hilton (Emily Padgett) who get adopted by a sleazy owner of a carnival freakshow. After years of abuse the duo get a chance to break out of their current situation and become famous vaudeville stars. I was impressed that the show didn’t shirk away for all the obvious questions about what it is like to be a conjoined twin. In one of the show’s more lighthearted moments, Buddy (Matthew Hydzik) sings about his love for Violet in the fun song “1 + 1 = 3” which kind of implies, without being explicit, certain things about how a relationship with Daisy and Violet would actually work.

The costume design by Paul Tazewell, makeup work by Cookie Jordan and scenic design by David Rockwell come together to form a beautifully weird tapestry that successfully transports the audience into another time, era and place. There’s never a moment in the show where you don’t buy that these people are real and that you aren’t getting a behind the scenes glimpse into the life of circus “freaks.”  They do amazing things with the standard tropes of the bearded lady, the giant, the 3 legged man (still trying to figure that one out), dwarves and more. 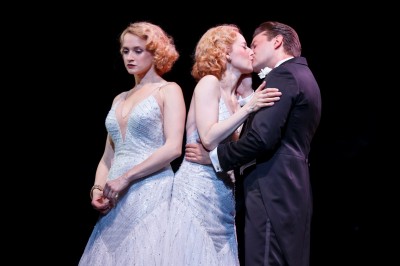 Visual effects occur in the most unusual ways in this show and always done with style. There’s a beautiful moment where Houdini floats from the sky and disappears after sprinkling glitter. Other times the primary effect is all based purely on Erin Davie and Emily Padgett’s stunning performance. I actually believed they were twins and spent most of the show trying to figure out how they were doing it. The amount of work and trust these two need to have in each to pull this off boggles the mind. 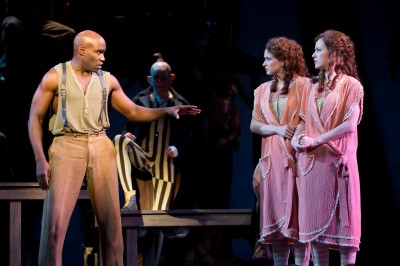 There are two or three moments during dream sequences where they sort of break the illusion and even that’s done beautifully. During the song “A Private Conversation,” Terry (Ryan Silverman) imagines what his life would be like with Daisy if the two weren’t tied together. The sequence starts off subtly with Violet seemingly disappearing through the floor and goes into full on dance sequence. At the end of it Violet reappears and we see them slowly move towards each other and reattach. Guy Lockard’s deep baritone gave his Jake character depth and richness. During one of the show’s signature moments “You Should Be Loved,” you felt his pain when he finally confesses his love for Violet as he tries to convince her not to marry Buddy.

My only complaint about the show was things get a bit weird in the last 10 minutes and somewhere along the lines the story sort of falls apart and doesn’t know where it wants to go and feels like it ends abruptly or prematurely.  But for two-thirds of the show, audiences are in for a truly mesmerizing experience. Side Show is currently playing at The Kennedy Center, June 14 – July 13, 2014.  This review is based on the June 19th, 2014 performance.