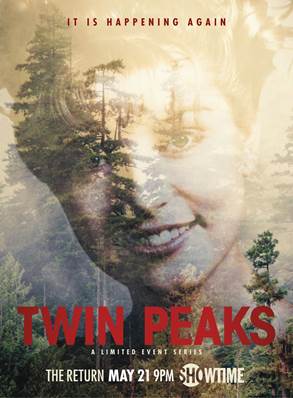 The 18-part Twin Peaks Limited Event Series was directed, in its entirety, by David Lynch – who co-created and co-wrote the series with Mark Frost.

The 18-Part Limited Event Series Premieres On Sunday, May 21 At 9 PM ET/PT 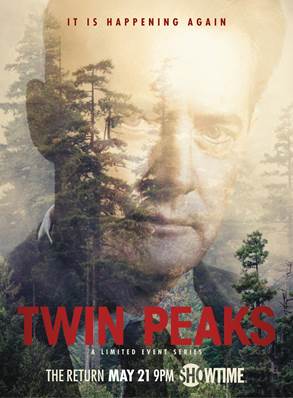 NEW YORK – February 24, 2017 – In honor of TWIN PEAKS Day, SHOWTIME has released dual posters for the new limited series, which will debut with a two-part premiere on Sunday, May 21 at 9 p.m. ET/PT on air, on demand and over the internet. One poster depicts Laura Palmer (Sheryl Lee), whose mysterious death sparked the TWIN PEAKS saga, while the other showcases series star Kyle MacLachlan as Special Agent Dale Cooper.

Directed entirely by David Lynch, the new SHOWTIME 18-part limited event series picks up 25 years after the inhabitants of a quaint northwestern town were stunned when their homecoming queen Laura Palmer was shockingly murdered. TWIN PEAKS is written and executive produced by series creators David Lynch and Mark Frost, and is executive produced by Sabrina S. Sutherland. For more information about TWIN PEAKS, go to: http://twinpeaksonshowtime.com, follow on @SHO_TwinPeaks and join the conversation using #TwinPeaks.