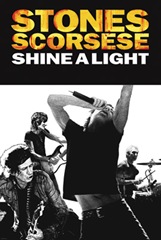 When Mick struts onstage, he resembles a Gerry [Thunderbirds] Anderson marionette on crack, while good ol’ Keef looks like he might not make it to his next solo – but The Rolling Stones can still rock the vast majority of today’s bands under the table. Martin Scorsese’s Shine A Light is more of a concert film than a documentary – though it does cut to some ironic and even prophetic clips from the early Stones.

Culled from two nights at New York’s Beacon Theater on October 29 and November 1, 2006, the performances were a charity benefit and we can tell from the photo ops with Bill and Hilary Clinton and their family and guests. But that’s not what matters here, and that aspect of the concert is dealt with fairly perfunctorily. What matters is the sizzling set that Stones fire off.

There’s a brief [ten or fifteen minutes] black and white section that deals with Scorsese’s efforts to get on top of filming the concert footage [he’s still waiting for the set list as President Clinton is announcing the band…]. This section is shown a regular theatre-sized rectangle in the middle of the vast IMAX screen. Then, a split second after Clinton intones, “…The Rolling Stones!” BAM! Sixty-foot tall Mick Jagger – and the band rips into Jumpin’ Jack Flash.

As concert films go, Shine A Light is the anti-MTV concert film. Scorsese’s cameras following the performances instead shredding it into a kaleidoscope of meaningless colors. Occasionally, the cameras are inches from the bands’ faces [best reaction shot of the night: Charlie Watts turning to his left and unexpectedly finding a camera just off his left shoulder. Classic stuff]. 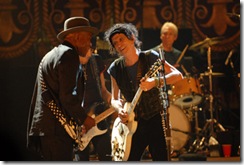 The cameras swoop and pan and glide in and around the band so that we see exactly what’s being played [no focusing on the picking fingers while the fretting is ignored – Scorsese is a rock fan and knows what he’s doing]; interactions between band members, and crowd reaction from the front rows [and I’m thinking the fix was in – how else to explain the preponderance of beautiful woman right up front?].

Performance-wise, the whole film is a highlight reel. This is a band that is tighter porpoise’s blowhole and yet can be loos enough to take advantage of moments of inspiration. But even in a highlight reel there are things that just stand out from the rest.

Here, those highlights amongst the highlights are three rousing guest appearances: Jack White dueting with Jagger on Lovin’ Cup; Christina Aguilera singing Live With Me with Jagger [and if she sang like this more often, instead of every last one of her considerable chops into most every song, she’d be much more of a musical force than she is], and blues legend Buddy Guy joining Mick for champagne and Reefer. 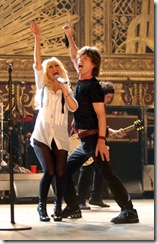 What Shine A Light more than just another concert film [even considering it’s the Stones!] is the way that Scorsese intercuts clips from the band’s interviews during the sixties and seventies. In one prophetic bit, a very young Jagger – who has noted in an earlier clip that he expects the band will try to last another year – is asked by Dick Cavett, “Can you see yourself doing this at sixty?” “Yes I can. Yes,” he replies.

The Stones’ set features a lot of their most popular stuff: Shattered, She Was Hot, All down the Line, Sympathy For the Devil, Start Me Up and Brown Sugar among them. The core band, Jagger, Richards, Ron Wood and Charlie Watts are backed up by a horn section [led by session legend Bobby Keys], keyboards [another session legend, Chuck Leavell], a bassist [Darryl Jones] and a trio of backup singers.

The arrangements are exquisite. Leavell’s keyboards shift from jazzy to bluesy to barrelhouse on demand; the horn section is used for punctuation – propelling songs forward without overwhelming them, and Jones’ bass is practically a part of Watts’ kit, their foundation is so seamless – and it should be noted that Watts sneaks little jazz fillips into his rock steady timekeeping to give the close listener just a hint that he’s got it goin’ on! 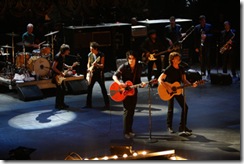 On guitars, Richards pounds out chunky chords, crisp chords, snarly chords and angular solos that sound like something midway between George Harrison and Neil Young – gone punky. Woods matches Woods for diversity of chord sounds and adds slightly more fluid sounds [and a tasty Emmons Pedal Steel on Far Away Eyes]. Even Jagger picks up a guitar and reminds us that he’s a better than competent rhythm guitarist himself – and shows off his harp skills to Buddy Guy’s amusement during Champagne and Reefer.

In the end, what matters isn’t that this is a beautifully directed film that manages to capture something of the essence of The Rolling Stones. No, what really matters is that these guys are for real – even now, forty-odd years since they first burst onto the music scene as part of The British Invasion of the mid-sixties – and the audience is appreciative of that fact.

Considering the vitality exhibited by the Stones during Shine A Light, it’s possible that the punchline of the old joke should be amended to, “cockroaches and The Rolling Stones…”

Shine a Light: The IMAX Experience. Better than being there.