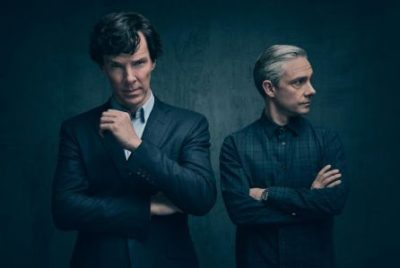 Fans can celebrate the dramatic conclusion of the fourth season of the highly acclaimed BBC/MASTERPIECE  drama which stars Emmy Award®-winners Benedict Cumberbatch and Martin Freeman in their iconic roles as Sherlock Holmes and Dr. John Watson as part of a special cinematic presentation for one night only. Audiences will experience laughter, tears, shocks and surprises in this thrilling, not-to-miss season finale, as well as 15 minutes of exclusive extras.

“Sherlock” producer Sue Vertue says, “Following the success of the limited theatrical run of “The Abominable Bride,” Hartswood Films are thrilled to be working with BBC Worldwide and Fathom Events to bring the Season Four finale, The Final Problem, to U.S. cinemas”

“We can’t think of a better way to start the new year off then experiencing the adventures of Sherlock Holmes and Dr. John Watson on the big screen. The bonus content will be an excellent treat for the shows loyal fans” said Soumya Sriraman, EVP, Franchise and Digital Enterprises, BBC Worldwide North America.

Tickets for “Sherlock: The Final Problem” can be purchased online by visiting www.FathomEvents.com or at participating theater box offices. Fans throughout the U.S. will be able to enjoy the event in nearly 350 movie theaters. For a complete list of theater locations visit the Fathom Events website (theaters and participants are subject to change).

Sherlock is a global phenomenon, engaging audiences from Berlin to Beijing, from Texas to Tokyo.  The show has sold to over 240 territories across the world, won 12 BAFTAs, 9 Emmys® and a prestigious Peabody Award as well as accolades at the Edinburgh TV Festival and the Television Critics Association.  Sherlock made its mark in U.S. pop-culture being one of only three British TV shows that have appeared on the cover of Entertainment Weekly.

“‘Sherlock’ fans are always dedicated and passionate, filling up movie theaters across the country for these exciting events,” Fathom Events Vice President of Programming Kymberli Frueh said. “We are thrilled to partner with the BBC team again to bring this thrilling series back to the big screen to allow fans to meet-up at the movies once again.”

“Sherlock” is written and created by Steven Moffat and Mark Gatiss, and inspired by the works of Sir Arthur Conan Doyle. Sherlock is produced by Sue Vertue and the executive producers are Beryl Vertue, Mark Gatiss and Steven Moffat for Hartswood Films, Bethan Jones for BBC Cymru Wales and Rebecca Eaton for Masterpiece. It is distributed internationally by BBC Worldwide.