The series premiere of Sex&Drugs&Rock&Roll is called Don’t Wanna Die Anonymous and it sets up the show’s unusual premise as quickly as possible: Johnny Rock (Leary) is sitting in a bar when a gorgeous young thing catches his eye. Thinking she’ll be a quick one-night stand, he swaggers (mostly) over to her and pulls her into a kiss – then finds himself on his ass on the floor. She’s his daughter! (mic drop)

Gigi (Elizabeth Gillies) has come to New York to find her dad and get his help. She wants to be a rock goddess and loves the one Heathens album but needs both a band and a writer. To Johnny’s astonishment, she has the goods – a dynamic, powerhouse voice with range.

The premiere is all about getting the band back together to see if she’s any good and – if she is – to give her a shot at making it (though Johnny, being the selfish, egotistical bastard that he is sees it as a change for him to make a comeback).

There’s a couple of moments in the premiere where a couple of different rock stars talk to an unseen interviewer – the best of which is Dave Grohl gravely intoning that ‘without The Heathens there’s have never been a Nirvana’ – and takes us immediately into the reality the show is creating.

FX made five episodes available for review and each of them riffs on a familiar trope – the unknown with the big voice; the animosity that split the band’s songwriting team; the guy who can’t write unless he’s blitzed; the band being big in Belgium; the bass player wanting to contribute songs; the band being required to go into therapy, and so forth. 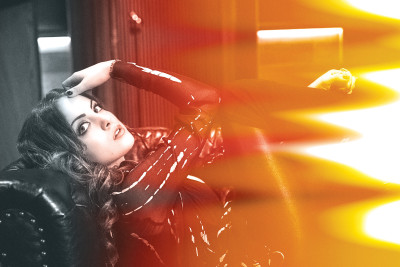 Created by Denis Leary, S&D&R&R explores the relationships between Rock and his wife, Ava (Elaine Hendrix) and between him and Gigi – and the dysfunctional mess that is The Heathens. It also establishes Gigi as a determined woman with the ability to call the shots and make them stick (not least of all because she comes to town with enough money to bankroll a month’s worth of songwriting, rehearsal and recording. It becomes clear early on that Ava is probably the only woman in the world who can talk Johnny down from his self-sabotaging screw up moments.

The original music (by Leary and Chris Phillips) is pretty terrific – the featured song from the premiere, Die Tryin’, is a powerhouse rocker that features some really crunchy guitar and a fine vocal by Gillies.

The band is an intriguing mix – Flash (John Corbett), the lead guitarist, was Johnny’s songwriting partner in The Heathens and now plays guitar for Lady Gaga; Bam Bam (Robert Kelly), the drummer, is the only member of the band to stay on speaking terms with his former bandmates; Rehab (John Ales), the bassist, got his nickname from going into rehab nine times and in five different facilities (he’s off drugs now – except for prescribed meds; a lot of prescribed meds) – he’s also written a twenty-nine song cycle, called An Gort Mor, about the Great Potato Famine in Ireland in 1840 (one of the songs accompanies the closing credits for episode three, Lust for Life.

I went into the five episode marathon of S&D&R&R with a certain nervousness – Leary’s stuff isn’t for everyone and sometimes he juuuuust misses. Fortunately, such is not the case here. Every episode is a crisp twenty-two minute look at some aspect of the hedonistic world of rock stars and (more importantly) wannabe rock stars (even now, Johnny still wants to be a rock star).

The humor is situational and so zingers are few and far between, but there are plenty of moments that make for belly laughs; more that elicits chuckles or groans, and plenty of moments of raw drama. The mix definitely leans towards humor and there’s plenty of genuine wit, as well.

Sex&Drugs&Rock&Roll is a delight because it never passes judgement on Johnny (or any of the characters). It presents a group of terribly flawed and human characters and lets them be themselves – even in the therapy episode.