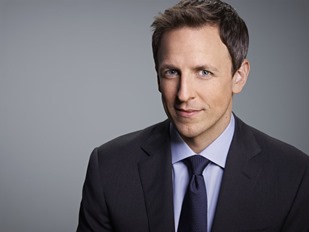 Award-winning director and producer Don Mischer will serve as executive producer, producing with Mischer will be Charlie Haykel and Julianne Hare.

The announcement was made by the Television Academy and NBC.

“Seth’s expertise and ease in front of a live audience during his time at ‘SNL,’ as well as his comedic brilliance both as a writer and in front of the camera on ‘SNL’ and ‘Late Night,’ makes him the perfect choice to host the Emmys,” said Paul Telegdy, President, Late Night and Alternative Programming, NBC Entertainment. “Plus, with Don’s vast experience at putting these type of big productions together, we’ll be in great hands.”

“Seth is such a talented performer and writer, and we know he will bring something unique to hosting the Primetime Emmy Awards,” said Bruce Rosenblum, Chairman and CEO of the Television Academy.  “We are also excited to welcome Don back this year and very much look forward to their collaboration as we celebrate television’s biggest night during one of the most transformative years in Television Academy history.”

Meyers is the host of NBC’s “Late Night with Seth Meyers” and was a member of “Saturday Night Live” since 2001. In addition to being the show’s head writer, Meyers was also a co-anchor of the show’s popular “Weekend Update” segment.

Earlier today, Meyers, who is also an Emmy winner, was named by Time as one of the 100 most influential people in the world for 2014.

Mischer is an internationally acclaimed producer and director of television and live events. He has been honored with 15 Emmy Awards, a record 10 Directors Guild of America Awards, two NAACP Image Awards, a Peabody Award for excellence in broadcasting, Europe’s prestigious Gold Rose of Montreux and the 2012 Norman Lear Achievement Award in Television from the Producers Guild of America.

Recent Don Mischer Productions projects include producing and/or directing the 2011-13 Academy Awards, and the Oscar red carpet shows. Other credits range from “We Are One: The Obama Inaugural Celebration at the Lincoln Memorial,” “The Kennedy Center Honors” to Super Bowl halftime shows, the Democratic National Convention, and the Opening Ceremonies of both the Winter and Summer Olympic Games.