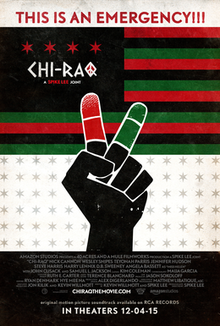 With Chi-Raq, he looks at the moment in time the death toll in the city of Chicago outpaced the death toll on American soldiers in Iraq – and both of his satirical big guns are fully loaded via, of all things, a classic ancient Greek play – Lysistrata, in which the women of Greece withheld sex from their men until they ended the Peloponnisian War.

Check out the cutting first trailer for Chi-Raq following the jump. Chi-Raq is in theaters on December 4th.

Chi-Raq is a modern day adaptation of the ancient Greek play “Lysistrata” by Aristophanes. After the murder of a child by a stray bullet, a group of women led by Lysistrata organize against the on-going violence in Chicago’s Southside creating a movement that challenges the nature of race, sex and violence in America and around the world.