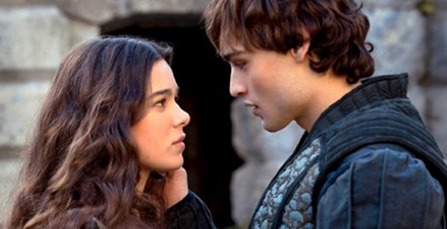 Carlo Carlei’s Romeo & Juliet hits the plays high points with a certain amount of style and some passionate performances, but is sabotaged by overly rapid pacing and a script that isn’t all Shakespeare. It’s still worth seeing, but it could have been so much better.

It’s a story we all know – love at first sight between members of feuding families; whirlwind courtship; secret marriage; death – and it’s been adapted for film many, many times. It’s always interesting to see a new adaptation of one of William Shakespeare’s most famous plays because condensing a two-and-a-half-hour play into a ninety-minute movie means what gets pruned may be as important as what does not. Carlo Carlei’s take on the play captures most of the emotional rollercoaster of the play and the violence (Shakespeare was a populist – he knew what it took to please the folks in the cheap seats).

Romeo of House Montague (Douglas Booth) begins the film pining for a girl from the hated Capulet family, but sees Juliet (Hailee Steinfeld) at a party – into which he has snuck with his cousins Benvolio (Kodi Smit-McPhee) and Mercutio (Christian Cooke) – and falls in love with her from across the ballroom. He engineers a meeting with her and the die is cast.

Before the film ends, there will be swordplay and death; family strife (in both houses), and the secret marriage that leads to the subterfuge that will ultimately lead to tragedy. It all takes place in a world of some opulence, like the classic Franco Zeffirelli version – but unlike that version, with its almost ethereal sensuality, this version’s opulence has a slightly dirty, lived-in feel that makes it even more relatable. 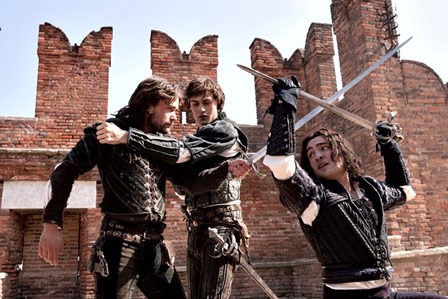 Booth looks a lot like the young Leonard Whiting of the Zeffirelli film, but Steinfeld is a more grounded, less sensual Juliet than Olivia Hussey. She feels more authentic, but part of that comes from her tendency to mumble like a normal teenager which, in turn, undermines her emotionally fine performance. It’s appropriate for the character’s age, but not for Shakespeare’s dialogue.

Where Carlei’s film works best is with the supporting characters. Damian Lewis is fine as Juliet’s temperamental father who can’t understand why she’s so unenthusiastic about marrying his choice, the wealthy, courtly Count Paris (Tom Wisdom); Natascha McElhone makes Lady Capulet ‘s peacemaker/advocate for Juliet sympathetic, and Lesley Manville establishes Juliet’s Nurse as a dirty old lady and inveterate gossip beautifully – in spite of how much of her part has been edited out.

The script, adapted by Julian Fellowes (Downton Abbey), captures much Shakespeare’s love of puns and gallows humor (Mercutio’s dying declaration), but prunes signature lines (‘A pox on both your houses!’) in favor of interpreting dialogue and rewriting the Bard. It might make understanding easier, but it takes away some of the poetry.

Overall, though Romeo & Juliet is effective enough – it is, after all, a great story. It’s just not brilliant.