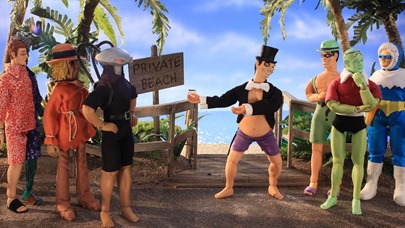 Adult Swim’s Robot Chicken will follow up its highly successful DC superheroes specila from last year with a second DC special that focuses on DC’s supervillains. The half-hour special, Robot Chicken DC Comics Special II: Villains In Paradise is set to premiere on April 6th (11:30/10:30C), and follows them ‘from the swamps to the sky to the beach, where they finally face a mind-boggling threat to their very existence!’

The Robot Chicken DC Comics Special II: Villains in Paradise returns the DC Comics universe of characters back into the twisted talons of the Emmy Award®-winning Robot Chicken. This time around, the villains take charge of the narrative, and their unpredictable tale takes them from the swamps to the sky to the beach, where they finally face a mind-boggling threat to their very existence! The all-star cast includes Seth Green as Batman and Robin, Zac Efron as Superboy, Alfred Molina as Lex Luthor, Sarah Hyland as Lex Luthor’s daughter Lena, Nathan Fillion as the Green Lantern, Alex Borstein as Wonder Woman, Clancy Brown as Gorilla Grodd, Giovanni Ribisi as the Joker, Tara Strong as Harley Quinn, Breckin Meyer as Superman, plus Hugh Davidson, Matthew Senreich, Clare Grant, Zeb Wells, and Kevin Shinick as the narrator.

DC Entertainment, home to iconic brands DC Comics (Superman, Batman, Green Lantern, Wonder Woman, The Flash), Vertigo (Sandman, Fables) and MAD, is the creative division charged with strategically integrating its content across Warner Bros. Entertainment and Time Warner.  DC Entertainment works in concert with many key Warner Bros. divisions to unleash its stories and characters across all media, including but not limited to film, television, consumer products, home entertainment and interactive games. Publishing thousands of comic books, graphic novels and magazines each year, DC Entertainment is the largest English-language publisher of comics in the world.  In January 2012, DC Entertainment, in collaboration with Warner Bros. and Time Warner divisions, launched We Can Be Heroes—a giving campaign featuring the iconic Justice League super heroes—to raise awareness and funds to fight the hunger crisis in the Horn of Africa.

Warner Bros. Animation (WBA) is one of the leading producers of animation in the entertainment industry, producing and developing both CG and traditionally animated projects for multiple platforms, both domestically and internationally. For TV, WBA produces series such as Beware the Batman and Teen Titans Go!, as well as the forthcoming The Tom and Jerry Show and Mike Tyson Mysteries. WBA also produces original content — including animated shorts — for Cartoon Network’s multiplatform branded DC Nation programming block in the U.S. As the home of the iconic animated characters from the DC Comics, Hanna-Barbera, MGM and Looney Tunes libraries, WBA also produces highly successful animated films — including the DC Universe Animated Original Movies — for DVD. One of the most-honored animation studios in history, WBA has won six Academy Awards®, 35 Emmy® Awards, the George Foster Peabody Award, an Environmental Media Award, a Parents’ Choice Award, the HUMANITAS Prize, two Prism Awards and 20 Annie Awards (honoring excellence in animation).