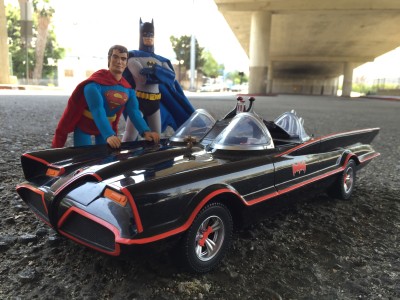 Somehow these two have become the best of friends – and Adult Swim’s Robot Chicken is going to explore what happens when this legendary bromance gets competitive. Adam West and Burt Ward join the voice cast for this extra-special/looney episode, Robot Chicken DC Comics Special III: Friendship Is Magic.

This will the third time Robot Chicken has taken aim at the DC universe and it’s coming to a TV screen near you, this fall – along the show’s eighth season. Follow the jump for details.

Robot Chicken is teaming up with DC Comics again for a third rendezvous with villains and heroes in the Robot Chicken DC Comics Special III: Friendship Is Magic. The special and season eight of the Emmy Award®-winning series will premiere this fall on Adult Swim.

Robot Chicken season eight has begun production with plans to get eight times the normal number of superstar actors to provide their voices for the show. (Correction: The previous sentence is financially impossible. Robot Chicken will feature our normal number of famous voice actors, which is a lot.)

DC Entertainment, home to iconic brands DC Comics (Superman, Batman, Green Lantern, Wonder Woman, The Flash), Vertigo (Sandman, Fables) and MAD, is the creative division charged with strategically integrating its content across Warner Bros. Entertainment and Time Warner.  DC Entertainment works in concert with many key Warner Bros. divisions to unleash its stories and characters across all media, including but not limited to film, television, consumer products, home entertainment and interactive games. Publishing thousands of comic books, graphic novels and magazines each year, DC Entertainment is one of the largest English-language publisher of comics in the world.

Warner Bros. Animation (WBA) is one of the leading producers of animation in the entertainment industry, producing and developing both CG and traditionally animated projects for multiple platforms, both domestically and internationally. For TV, WBA produces series such as Teen Titans Go!, The Tom and Jerry Show and the upcoming Be Cool Scooby-Doo! and Wabbit – A Looney Tunes Production for Cartoon Network as well as Mike Tyson Mysteries for Cartoon Network’s Adult Swim. As the home of the iconic animated characters from the DC Comics, Hanna-Barbera, MGM and Looney Tunes libraries, WBA also produces highly successful animated films — including the DC Universe Animated Original Movies — for DVD. One of the most-honored animation studios in history, WBA has won six Academy Awards®, 35 Emmy® Awards, the George Foster Peabody Award, an Environmental Media Award, a Parents’ Choice Award, the HUMANITAS Prize, two Prism Awards and 20 Annie Awards (honoring excellence in animation).

Stoopid Buddy Stoodios is an artist-friendly collective that houses some of the finest talent in all of animation. The company has a knack for creating unique visuals and telling character driven stories with an uncanny sensibility. The company’s two-building campus and state-of-the-art facility located in Burbank, CA, makes it the largest studio specializing in stop-motion animation in California. The company’s work covers the animation gamut, ranging from charming hand-crafted animation all the way to high-end feature quality animation.