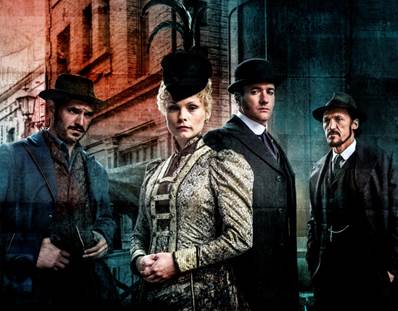 The robbery of a goods train leads to a cataclysmic locomotive disaster on Leman Street, reuniting the men and their resentments to seek its cause.

The robbery of a goods train leads to a cataclysmic locomotive disaster on Leman Street, reuniting the men and their resentments to seek its cause.

New York – March 26, 2015 – BBC AMERICA’s critically-acclaimed and BAFTA nominated original British drama Ripper Street returns in April. Picking up in 1894, four years after the culmination of season two, the new season reveals a vivid and sensual descent into the lives of the men and women who must live on the violent streets of Whitechapel in late Victorian London. Ripper Street premieres Wednesday, April 29, 10:00pm ET on BBC AMERICA.

Four years have passed since Reid bayed for Drake to end the life of Jedediah Shine. Four years that have seen the crime-fighting axis of Reid, Drake and Jackson split and isolated from one another. Drake has left London for Manchester to become the policeman – and man – he felt he could no longer be in Whitechapel. He is an Inspector himself now. Jackson has reverted to the man Reid plucked out of the Tenter Street brothel, a two-penny, sawbones, clap-doctor. And Reid has succumbed to his own shame and isolation, policing Whitechapel with a level of forensic detail and dedication that leads Chief Inspector Fred Abberline to fear for his old friend’s mental well-being.

Meanwhile, Long Susan has made good on her threats to both Captain Jackson and the dying Silas Duggan – she has separated from her husband, taken command of Duggan’s criminal empire and turned it into a legitimate property empire of huge philanthropic ambition. But such aspirations are costly, as her loyal but scheming solicitor Ronald Capshaw knows only too well.

All these resentments, fears and ambitions are soon forgotten, however, when two trains collide on the newly constructed bridge above Leman Street. It is a catastrophe which falls into Reid’s world and demands explanation. His pursuit reunites him with Drake and Jackson and sets him on his own collision course with his past and with the secret crimes of Long Susan and Ronald Capshaw.

The third season of Ripper Street was filmed in Manchester, Loughborough and Dublin and is produced by Tiger Aspect Productions and Lookout Point. It is co-produced by BBC AMERICA and Amazon Prime Instant Video, and distributed by BBC Worldwide. 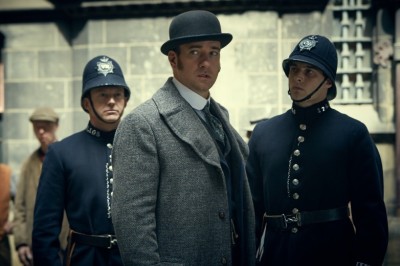 The fallout from his failure to catch Jack The Ripper still casts thick and protracted shadows for Detective Inspector Edmund Reid. Yet since the departure of his friend and comrade, Sargent Bennet Drake, Reid has succumbed to the kind of moral entropy he had always previously fought…and it has created a hole where his heart should be. Reid has yielded to his own shame and isolation, policing Whitechapel with a level of forensic detail and obsession that leads Chief Inspector Fred Abberline to fear for his mental well-being. Reid is a man isolated in the world, and it may only be the return of Drake that can help cast aside his dark abyss.

The world of H Division has slipped from its axis, and Whitechapel needs vigilant policing more than ever. It needs Detective Inspector Edmund Reid truly back at its helm. 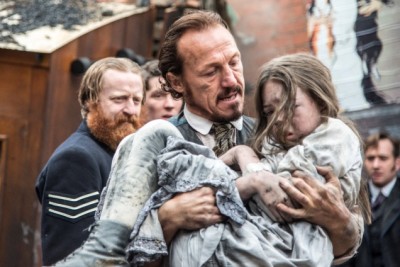 Bennet Drake has undergone a personal revolution. He has grieved the loss of his wife, Bella, and he has reinvented himself. His thuggish past entirely rejected, he has foresworn violence and dedicated himself to becoming the policeman – the man – he always wanted to be: calm, methodical, procedural. A man of peace. But this has only been made possible by distancing himself from Whitechapel, the place he was born and raised, and by leaving London for Manchester where four years of exemplary policing have seen him promoted to Detective Inspector. But now he is back and ready to tackle the dark forces of East London once again. 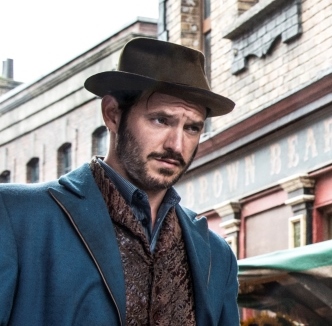 American native Homer Jackson is no longer bound by the need to evade the authorities in his homeland. Despite his newfound freedom he cannot bear to leave the Whitechapel streets that he now considers his true home. When his marriage to Long Susan collapsed, Jackson reverted to the man Reid plucked out of the Tenter Street brothel: a two-penny sawbones, a snake-oil pushing clap-doctor. Not that this situation currently riles him – he has all the time in the world to indulge his desires. But Drake and Reid require his unique skill set once again and he is unwillingly pulled back into the lures of H Division. 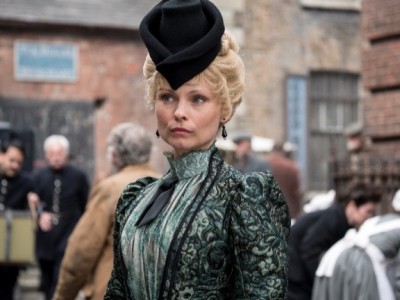 Her marriage to Captain Homer Jackson may have disintegrated but, in the intervening four years, Long Susan has embraced her philanthropic work with Obsidian Estates.  But the one business from which she will no longer profit is prostitution – never again will she exploit another woman for her commercial gain. Instead Susan has learnt the good she can provide to the streets of Whitechapel – the lives she can potentially change. But she is ambitious, and it is her ruthless streak that may be her undoing…

Four years have passed. Time that has seen Reid, Drake and Jackson split and isolated from one another. But when the robbery of a goods train leads to a cataclysmic locomotive disaster on Leman Street itself, the men and their resentments, are reunited to seek its cause. Meanwhile, Long Susan has made good on her promise to take control of Obsidian Estates, and has turned it into a legitimate business of huge philanthropic ambition.

EPISODE TWO – THE BEATING OF HER WINGS

A routine murder inquiry in a curiosity shop reveals a secret underground cell. The murder itself may have links to Long Susan’s burgeoning property empire, Obsidian Estates, but Reid is far more concerned as to the identity and whereabouts of that cell’s prisoner, a young girl kept there for many years. It is an investigation which is to confront him with both his greatest shame; and his greatest hope.

Chief Inspector Abberline asks Drake to take over the helm of H Division. But Drake is far from keen to preside over his friend’s desk. The inexplicable death of a clairvoyant takes our team into a world of devious charlatans capitalizing on the grief of a sorrowful community. Further questions arise when Drake and Jackson meet a grieving widow, who unlocks the heart of a deceptive scheme.

EPISODE FOUR – YOUR FATHER. MY FRIEND.

As a lost girl wanders the dangerous streets of the East End alone, Detective Inspector Drake must try to find his old friend Edmund Reid and bring those responsible to justice. While there are still questions to answer about the death of Horace Buckley, the team of H Division unites to locate the girl. When tangible proof to finally bring Capshaw to justice arrives, attempts to arrest him will deliver devastating consequences.

A destructive gang of youths unleash hell upon the streets, but it’s not until daylight breaks that the true horror of their brutal work is revealed. The trail leads the team of H Division into the heartland of one of the city’s oldest trades – the London Breweries – where conflicted loyalties reign, and grief and anger create a potent concoction.

The dark and corrupt streets of Whitechapel are witnessing a new breed of tourist; one from the higher realms of society wanting salacious entertainment. Yet Lady Montacute’s curiosity means she now stands before the men of Leman Street charged with the vicious stabbing of a local woman. Over one long rainy night, H Division must unearth the true culprit before the weight of the authorities bears down upon them.

The murder of a chemist leads the team into the shadowy underworld of illegal abortionists and a backstreet racket which conceals a nefarious scheme. And when one of Long Susan’s business ventures is on the cusp of ruin, she realises she needs to regain control – despite the patriarchy’s attempts to undermine her every effort. Meanwhile Dr Frayn’s desires to modernise the practices at Obsidian Clinic sets her in conflict with both Susan and the authorities.

An American journalist is killed in Whitechapel and his exclusive story threatens seismic consequences for numerous Whitechapel residents. And with her business empire slipping through her fingers, Long Susan has to contend with some shocking news, and a face from her past who returns to exert their control. As the team of H Division inch ever nearer to the truth about the train robbery, the revelations expose some disturbing home truths, and life altering decisions have to be made.