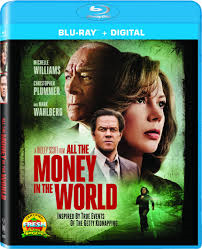 ALL THE MONEY IN THE WORLD

TORONTO, Ontario (April 3, 2018) – From director Ridley Scott (The Martian, Gladiator) comes the thrilling crime drama ALL THE MONEY IN THE WORLD, now on Digital and available on Blu-ray™, and DVD April 10th from Sony Pictures Home Entertainment Canada. Academy Award® nominee Michelle Williams (Best Supporting Actress, Manchester by the Sea, 2016), 2017 Academy Award®, BAFTA Award, and Golden Globe® Award nominee Christopher Plummer (The Girl with the Dragon Tattoo, Beginners) and Mark Wahlberg (The Fighter, The Departed) star in the explosively entertaining story of the 1973 Getty kidnapping. This Oscar®-nominated thriller makes its eagerly awaited home entertainment debut with must-own bonus features, including 8 deleted scenes and 3 featurettes inspired by the true events of this shocking tale and an inside look at its already-legendary production.

Join director Ridley Scott and the cast and crew as they discuss the fast-paced and exciting way Scott filmed this epic movie — including looks into the wardrobe, locations and score — in “Ridley Scott: Crafting a Historical Thriller.” In “Hostages to Fortune: The Cast,” hear from the award-winning cast as they share the research they did to connect to their real-life characters. Finally, go behind the scenes of this unprecedented film’s production with “Recast, Reshot, Reclaimed,” which offers an inside look at the urgent recasting of the character J. Paul Getty, a little over a month before the movie’s theatrical release.

Synopsis: ALL THE MONEY IN THE WORLD follows the kidnapping of 16-year-old John Paul Getty III (Charlie Plummer) and the desperate attempt by his devoted mother Gail (Michelle Williams) to convince his billionaire grandfather (Christopher Plummer) to pay the ransom. When Getty Sr. refuses, Gail attempts to sway him as her son’s captors become increasingly volatile and brutal. With her son’s life in the balance, Gail and Getty’s advisor (Mark Wahlberg) become unlikely allies in the race against time that ultimately reveals the true and lasting value of love over money.

ALL THE MONEY IN THE WORLD was written by David Scarpa (The Day the Earth Stood Still, The Last Castle) and is based on the book by John Pearson. It was produced by Dan Friedkin (The Square), Bradley Thomas (The Square), Quentin Curtis (Legend), Chris Clark (Legend), Ridley Scott, Mark Huffam (The Martian) and Kevin J. Walsh (Manchester by the Sea).

Inspired by historical events. Certain scenes, characters and dialogue have been fictionalized for dramatic purposes.

Blu-ray, DVD & Digital Bonus Features Include:
8 Deleted Scenes
“Ridley Scott: Crafting a Historical Thriller” – Director Ridley Scott and the cast and crew discuss the fast-paced and exciting way he filmed this epic movie.
“Hostages to Fortune: The Cast” – A look into the award-winning actors and their connections to their real-world characters.
“Recast, Reshot, Reclaimed” – This piece follows the unprecedented recasting of the character J. Paul Getty a little over a month before the film’s theatrical release.

It has a runtime of approximately 133 minutes and is rated 14A.