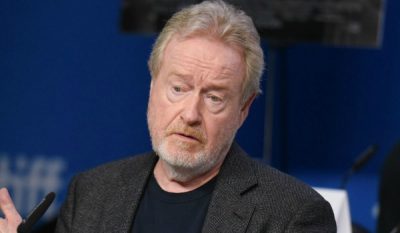 Initial plans call for the block to serve as a showcase for hour-long series, short-form programs and other formats to be developed in collaboration with Scott.

This will be Scott’s second project with TNT. He previously served as executive producer on the network’s award-winning CIA miniseries The Company in 2007.

Turner’s TNT has begun working with master storyteller and filmmaker Ridley Scott (The Martian, Blade Runner, Alien: Covenant) to develop a night of original science-fiction programming. Initial plans call for the block to serve as a showcase for hour-long series, short-form programs and other formats to be developed in collaboration with Scott. The slate is being produced by Scott’s Scott Free Productions in association with Turner’s Studio T, with Scott and David W. Zucker (The Good Wife, The Man in the High Castle) serving as executive producers and Jordan Sheehan (The Good Fight, The Terror) and Clayton Krueger (JCVJ, Mercy Street) as co-executive producers.

“We’re looking to create a programming block filled with the kind of imaginative, awe-inspiring storytelling that has made science fiction such a beloved and enduring genre,” said Sarah Aubrey, executive vice president of original programming for TNT. “Ridley Scott has created some of the best and most popular science-fiction movies of all time, and we look forward to bringing his fans even more of his smart, sophisticated stories.”

One of the world’s foremost directors and producers, Ridley Scott is known for his work on such films as The Martian, Thelma & Louise, Alien, Black Hawk Down, Blade Runner and Gladiator. Throughout his illustrious career, Scott has been lauded with Emmys®, Producers Guild of America Awards and Directors Guild of America Awards. Scott serves as head of RSA and Scott Free Productions.

“Being given the creative license to generate and develop science fiction programming in a variety of formats for TNT is very exciting,” said Scott. “This genre is one of my favorites, and there are an infinite amount of original and innovative story ideas out there that we are looking forward to exploring with TNT. It is very exciting for all of us.”

TNT’s new sci-fi block will mark Scott’s second project for the network. He previously served as executive producer on the network’s award-winning CIA miniseries The Company in 2007.

Scott Free Productions is the film and television production company of acclaimed filmmaker Ridley Scott. In the 20 years since Scott Free was formed, the company has earned over 100 Emmy® nominations with 22 wins and 28 Golden Globe nominations for its television projects. Current productions include the third season of the landmark series adaptation of Philip K. Dick’s classic The Man in the High Castle for Amazon; the widely acclaimed The Good Fight, a CBS all-access spin-off of The Good Wife; season one of the Amazon half-hour action-comedy JCVJ, starring Jean-Claude Van Damme; the forthcoming AMC historical anthology series The Terror; and pilots of The Passage, a post-apocalyptic thriller for FOX, and the legal drama Perfect Citizen, starring Noah Wyle for CBS. Notable projects on the current development slate include Strange Angel, based on the eponymous book that explores the life of JPL co-founder John Parsons and his secret obsession with occultism, and 3001: The Final Odyssey, as well as limited series adaptations of Blood & Thunder, the epic tale of Kit Carson and the conquering of the American West, and the best-selling non-fiction thriller The Hot Zone for National Geographic.

Other hailed Scott Free productions include the Emmy and Golden Globe®-nominated, Peabody-winning drama The Good Wife, which recently concluded its seventh and final season on CBS; two seasons of the esteemed PBS Civil War medical drama Mercy Street; Numb3rs, which ran for six successful seasons on CBS; and the acclaimed and Emmy-nominated National Geographic channel series of Killing telefilms: Killing Jesus, Killing Kennedy, Killing Reagan and the docudrama Killing Lincoln. Notable long form programs include Klondike for Discovery, the Emmy and Golden Globe-nominated The Pillars of the Earth for Starz, World Without End for Reelz, the Emmy-nominated Into the Storm for HBO, the Emmy-nominated The Andromeda Strain and Coma for A&E, the Golden Globe-nominated The Company at TNT and a feature-length digital series for X-Box/Microsoft, Halo: Nightfall. Acclaimed non-fiction programs include Crimes of the Century and the Emmy-winning documentary special Gettysburg for History Channel.

With offices in Los Angeles and London, Scott Free works closely with RSA Films, one of the world’s largest and most successful commercial production houses in the world.

TNT, a division of Turner, ranks among cable’s Top 5 networks with young adults and is home to one of cable’s most popular slate of original series, including Animal Kingdom, Good Behavior, The Last Ship, Major Crimes, The Librarians and the upcoming Claws, Will, The Alienist and more. TNT also presents popular shows like Arrow, Supernatural, Bones and Castle; primetime specials, such as the Screen Actors Guild Awards® and the iHeartRadio Music Awards; and championship sports coverage, including the NBA and the NCAA Division I Men’s Basketball Championship.