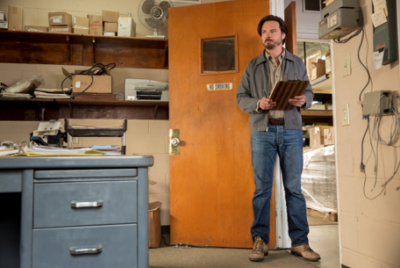 The story of Rectify’s Daniel Jolden (Aden Young, above) is winding down as the critically acclaimed, Peabody Award-winning series begins its fourth and final season on SundanceTV.

Daniel has begun his new life at the halfway house, The New Canaan Project, in Nashville. Separated from his family and banished from the state of Georgia, Daniel continues his struggle to manage life after prison – and he’s about to be pushed out of his comfort zone.

“One of the most hypnotic shows on television.”– Ken Tucker, Yahoo! TV

“Its meditative and poetic quality make for a truly unique and moving tale of redemption and forgiveness.” – Eric Goldman, IGN

The fourth and final season of SundanceTV’s critically acclaimed series, “Rectify,” debuts on Wednesday, October 26 at 10:00 p.m. ET/9:00 p.m. CT. Episodes throughout the season will be available the day after linear premiere via On Demand services including Sundance.tv and the SundanceTV app. The first two episodes will be available with no log-in required.

Prior to the premiere episode, viewers can catch up with a marathon of season three beginning that morning, Wednesday, October 26 at 6:00 a.m. ET/5:00 a.m. CT.

On the season four premiere episode, “A House Divided,” months after moving to Nashville, Daniel is still navigating the complicated dynamics of group living at The New Canaan Project. His housemates, sensing his lack of connection, challenge him to engage. Daniel seeks counsel from Avery, the group leader, an act that leads to a personal revelation. Meanwhile, Daniel is also coping with his new normal and the rote work that fills his days as a warehouseman. Daniel is forced out of his routine when he encounters new acquaintances and a new community at an artist co-op.

Daniel has begun his new life at the halfway house, The New Canaan Project, in Nashville. Separated from his family and banished from the state of Georgia, Daniel continues his struggle to manage life after prison.

The hour-long episodic drama was created and written by Academy Award® winner Ray McKinnon (The Accountant, Chrystal) and is executive produced by McKinnon, Mark Johnson and Melissa Bernstein, the award-winning producers behind “Breaking Bad,” “Better Call Saul,” and “Halt and Catch Fire,” and Marshall Persinger (“Army Wives”). The final season will be comprised of eight episodes.

“Rectify” stars Aden Young (Killer Elite, The Tree) as Daniel Holden; Abigail Spencer (“Mad Men,” “True Detective”) as Amantha Holden, Daniel’s younger sister who, after devoting her entire adult life to securing his release, now has to find her own identity; J. Smith-Cameron (“True Blood,” Margaret) as Janet Talbot, Daniel’s loving mother who must put her family back together as best she can; Luke Kirby (Take This Waltz, “Show Me A Hero,” “Slings & Arrows,” and “Touched With Fire”) as Jon Stern, Daniel’s lawyer who works for an organization dedicated to exonerating the wrongfully convicted; Clayne Crawford (A Walk to Remember, “24”) as Ted Talbot, Jr., Daniel’s stepbrother and the person with whom he has the most complicated relationship; Adelaide Clemens (Silent Hill: Revelation 3D, The Great Gatsby) as Tawney, Ted’s kind-hearted wife who relates the most to Daniel; Bruce McKinnon (Billy Lynn’s Long Halftime Walk, Lawless) as Daniel’s stepfather Ted, Sr.; Jake Austin Walker (“Fear the Walking Dead,” The Chaperone) as Daniel’s half-brother Jared and JD Evermore (“True Detective,” “The Walking Dead”) as Sherriff Daggett, who is searching for the truth around Daniel’s conviction armed only with the information he can piece together 20 years later.