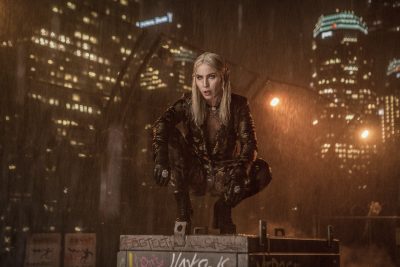 Noomi Rapace’s unnamed Elf wants to know what happened in this clip from Netflix’s Bright.

She never raises her voice, but she’s still scary as hell.

Humans, Orcs, Elves… everybody is just trying to get along. Get ready for the world of Bright, a new Netflix Original Film, starring Will Smith and Joel Edgerton. Coming to Netflix December 22nd.

About Bright
Set in an alternate present-day where humans, orcs, elves, and fairies have been co-existing since the beginning of time. Bright is genre-bending action movie that follows two cops from very different backgrounds. Ward (Will Smith) and Jakoby (Joel Edgerton), embark on a routine patrol night and encounter a darkness that will ultimately alter the future and their world as they know it. Bright is available only on Netflix this December.