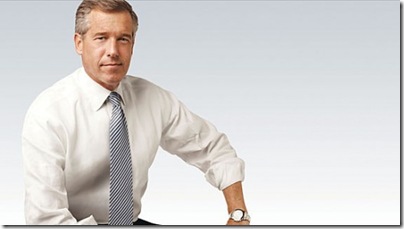 NBC has canceled the ambitious but vacuous primetime soap The Playboy Club and will replace it with primetime newsmagazine Rock Center with Brian Williams. Rock Center will premiere on Monday, October 31.

‘Brian Williams already anchors America’s most watched, honored and respected nightly news broadcast. ‘Rock Center’ now gives him, and our all-star cast of journalists an opportunity to take viewers on a weekly journey of discovery," said Capus. "Smart, original and occasionally irreverent, we hope it will become a destination for viewers looking for something special."

“There’s no one more enlightening or personable in the news business than Brian Williams,’ said Greenblatt. ‘We welcome Brian and this fresh new take on a primetime news show to our schedule, especially as we head into an election year.’

‘Rock Center will cover a slightly different world than anything else on television,’ said Williams. ‘The format will be good, real, hard journalism – and then some. We intend to be the new home of quality journalism on a weekly basis, and on the web at all times.’

Broadcast live from the historic Studio 3B in Rockefeller Center, the weekly, hour-long newsmagazine will be built around the week’s most provocative events, compelling coverage, and newsmaker interviews. In this new venue, Williams and NBC’s trusted global news division will take viewers deeper into the world’s most talked-about stories — and raise the curtain on stories begging to be told.

In addition to the weekly primetime broadcast, there will be constantly evolving digital editions of ‘Rock Center with Brian Williams’ available online at RockCenterNBC.com and via the show’s iPad app.