The opening sequence of Dead Men Tell No Tales finds young Henry (Lewis McGowan) rowing out to sea, tying a bag of rocks to his leg and plunging into the sea – where he lands on the deck of the sunken Flying Dutchman and we learn that he is the son of Will Turner (Orlando Bloom).

From there we shift to Captain Jack Sparrow (Johnny Depp) and his crew robbing a bank – an effort that takes a hilarious path.

It’s a true pity that the rest of the movie couldn’t have been as inventive.

After the spectacular failure of the bank robbery, Sparrow’s crew desert him and he sinks so low that he trades his compass (the one that points to whatever you most desire) for a bottle of booze – setting Captain Salazar (Javier Bardem, Vickie Christina Barcelona, Skyfall) free. And he has an impressive need to kill Sparrow. 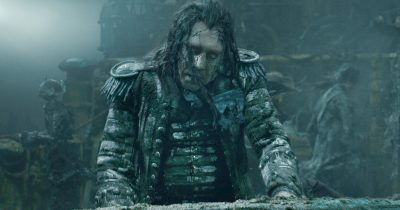 Pirates of the Caribbean: Dead Men Tell No Tales – Captain Salazar (Javier Bardem) and the Black Pearl in a Bottle – Photo courtesy of Walt Disney Studios.

Henry believes it will set his father free; Carina believes it to be her birthright, and Sparrow is, more or less, along for the ride – at least until he learns that Salazar is after him. Not only that, but Captain Barbossa (Geoffrey Rush, Genius, The King’s Speech) has promised Salazar that he will lead him to Sparrow.

So, that’s your plot – with one or two plot twists (one of which is another of the film’s few bits of brilliance). 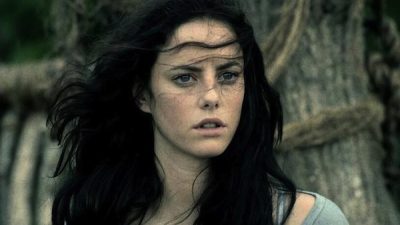 What follows is two hours and ten minutes of unrelenting action as all the players relate their stories and get into (and out of) trouble.

Along with the few bits of entertainment value I’ve mentioned, there’s also some very fine action choreography and Dead Men Tell No Tales is directed with more panache than the last two entries in the franchise.

Norwegian co-directors Joachim Rønning and Espen Sandberg bring a sense of spontaneity that we haven’t seen since Curse of the Black Pearl – and their sense of staging is extremely good. If only they had a script that allowed them to do more with the characters. 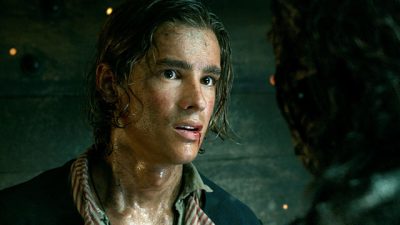 Depp’s Sparrow has been reduced to slapstick. Captain Jack has more pratfalls here than in any two previous Pirates’ excursions. Along with his mumbling and seeming disinterest in the proceedings, Depp is reduced to nothing less than the drunken uncle no one wants to see anymore.

That’s too bad because the new kids a board the franchise are far more interesting but not given enough time to balance out the witless, disinterested Sparrow.

Henry is smart, funny and pretty decent in a fight; Carina, a woman of science (who is perceived as a witch), is as tough as any of the men and smarter – while being just as capable as any of the others.

If Dead Men Tell No Tales had been as interested in its characters as it is in general swashbuckling, it coulda been a contender.

As it is, it falls just a hair shy of average – rendering all that money spent on glorious CGI and effective 3D pretty much worthless.