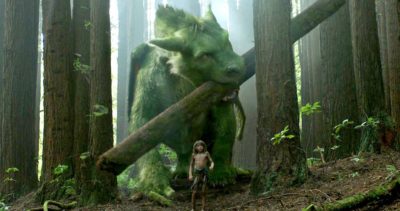 The story essentially boils down to a lost boy finding family and learning to move on, but it’s also about the magic of storytelling and carrying on after tragedy.

Pete and his parents are going camping when a deer bounds onto the road in front of them and Dad swerves to avoid it – leading to a crash which only Pete survives. When he finds himself surrounded by wolves in the woods at night, Pete – a gigantic, furry green dragon – saves his life. Cut to six years later. 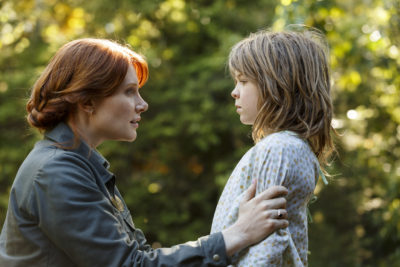 Pete is seen by a forest ranger named Grace and her daughter Molly. While being chased by Grace’s brother-in-law, Pete falls from a tree and is knocked unconscious – waking up in a hospital.

Meanwhile the brother-in-law and some buddies find a large track and follow it to the cave that Elliott shares with Pete.

So you’ve got Pete, after attempted escapes, spending the night with Grace, Molly and Jack (husband and father) and Gavin (the brother-in-law), after being scared by Elliot, going back the next morning and hunting and capturing him.

There’s a vague pass at the plundering of natural resources (logging), but the movie is about Pete’s relationships (the friendship with Elliott and the discovery that Grace and her family fill a need he hasn’t recognized in years) and the idea that human beings can be petty, greedy and scared (Gavin captures Elliot because he’s ‘dangerous’ – and to make money off him).

Oakes Fegley is remarkable as he makes Pete both a mini-Tarzan and a curious kid and Bryce Dallas Howard is a warm (but not too much so so) mom who is still very much an independent spirit. Wes Bentley is underused as Jack, but seems a decent sort – and a good dad.

Oona Laurence (the daughter in Bad Moms) is terrific as Molly – an inquisitive little girl who finds Pete mysterious and funny.

Robert Redford is Grace’s dad, who tells stories about the Millhaven Dragon that are somewhat exaggerated, but built around a kernel of truth – it’s his story that frames the movie and gives it just that little extra bit of charm that elevates it from tall tale to terrific anecdote. 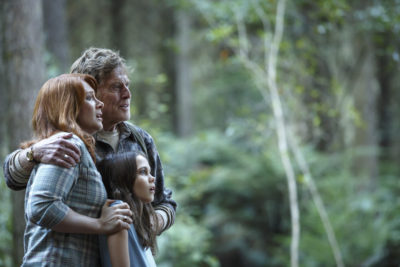 Karl Urban’s Gavin is impulsive, petty, greedy and scared, but he’s not actually evil (when he and his buddies hunt down Elliot, it’s with tranquilizer darts). Refreshingly, he can be taught.

Elliot may be my new favourite CGI character – he’s like a gigantic puppy with wings. He’s curious and sweet and very protective of Pete (who named him Elliot because of his favourite book, Elliot Gets Lost). The CG is so good you can really see and understand what’s going on in his mind – and his relationship with Pete is thoroughly charming.

Bojan Bazelli’s cinematography captures the forests of the Pacific Northwest splendidly – it’s beautiful and majestic – and yet, like the film’s characters, warm and magical.

There are obstacles to the happy ending – the revelation that the legendary Millhaven Dragon is real leads to complications (including the chase sequence referenced in the trailer, ‘You can’t say dragon on the radio!’), and a life or death situation that teaches Gavin that just because something’s different, it doesn’t mean it’s a monster – but the film’s happy ending isn’t the smarmy, overly sentimental kid. It feels exactly right.

Co-written by director David Lowery and Toby Halbrooks (the team that did Ain’t Them Bodies Saints), Pete’s Dragon is a genuinely heartwarming film that is as memorable as anything Disney’s done in the last decade.