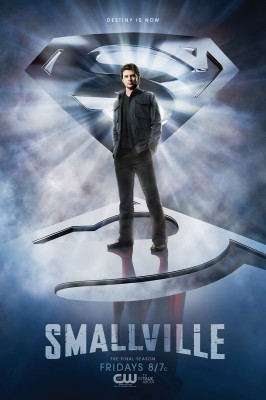 After ten long years, Smallville went out with a bang. The CW Network is to be commended for letting their longest running show go out in the style that it deserves. I loved the first three seasons of the show, but bailed in Season Four. I got hooked on the show again in Season 8. There’s just something about that show that against all odds worked and it somehow managed to get better with time.

Yes the low budget nature meant that the show didn’t have a lot of effects and really the sets were pretty plain, while everything was shot in the “dark.” But everyone involved with Smallville clearly loved the characters and unlike most long running shows (I’m looking at you X-Files – yes, I’m still bitter about that show), the folks at executive producers Brian Peterson and Kelly Souders had a clear vision and plan for the show and most likely what the last moment would be.

We all scoffed at their insistence on the No Tights and Flights rule and over the years they managed to continually tease it – especially the last few years, wetting our appetites. Fanboys and Fangirls alike got annoyed and this concept became a joke, I mean really a “Superman” who was afraid of heights and couldn’t fly? Other Smallvillle questions like how the heck was it possible that cannon Lex Luthor doesn’t know who Superman is, or even the idea that Lex lived in Smallville? Or how about the fact that Jimmy Olson died on the show, how were they going to resolve that?

Yes, the 2-hour finale had a lot of questions and loose ends to tie up and somehow make the Superman World they created fit in with the world most fans “know” and “expect.” It was a tall order and it was executed perfectly. I don’t have a single complaint about this finale. It was flawless. Everything was tied up in an inventive and nice way and the episode had lots of great moments.

The show opened with a nice bittersweet moment with everyone’s favorite pixie Chloe Sullivan (Allison Mack). The first forty minutes is all about nostalgia – we see a return of Jonathan (John Schneider) and Martha Kent (Annette O’Toole), and get a lot of nice Lois (Erica Durance) and Clark (Tom Welling) moments.

While Smallville clearly doesn’t have a big SFX budget, I kind of marked out when they finally showed Apocalypse. It was an awesome moment. The 2nd hour is where all the good stuff really kicks in. How awesome is Tess (Cassidy Freeman)? I mean really? How AWESOME is she? She’s had the most radical and complete transformation of any of the Smallville characters and the conclusion of her story was brilliant and really shocking. I didn’t see it coming at all.

We all wondered about how the Writers would get themselves out of the Lex (Michael Rosenbaum) in Smallville and knowing Clark’s secret conundrum and they did it. They pulled off one of the best Retcons ever! Rosenbaum coming back for the finale episode just felt right. It would have been nice to somehow work a Lana and Pete cameo into it, but then that probably would have been too much.

But really, the showstopper is what we’ve waited ten years to see – Tom Welling in full flights and tights mode and it was an incredible moment. Seeing him finally fly was amazing enough, but in full gear and Lois’ reaction to it was great. Add to that, the producers spent the money to get the original John Williams Superman music for the entire last ten minutes. Amazing.

For me, Smallville is now the definitive Superman story. I now want to go back and watch the entire 10 season journey again in one long marathon because everything they did on the show that led up to the Series finale made it feel like everything I watched prior (the bad episodes, the good eps, all the Lana crap, etc.) felt like there was now a point to it all. You could almost see all the threads from every season come together in the final 5 or 10 minutes of the finale. THIS is how you end a series folks! Not the crap they did with Law and Order, Heroes, Lost or The X-Files (who had no excuse because they had a full year to plan and two years for Lost). At the end of Smallville, I didn’t feel cheated, confused, or wanting more. I just said, “Ah, flawless! The Journey is now complete!”

One thought on “Perfect Series Finale!”