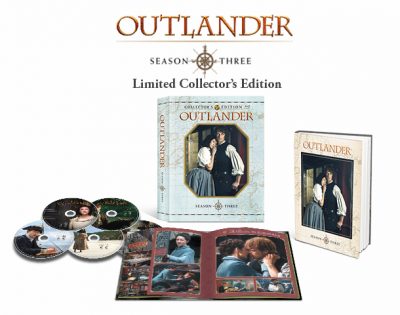 True Love Is Worth The Wait

Toronto, ONTARIO. (March 26, 2018) – Separated by continents and centuries, Claire and Jamie’s epic time-traveling love story continues when OUTLANDER: SEASON THREE debuts April 10 on Blu-ray™ and DVD, as well as on a Limited Collector’s Edition, from Sony Pictures Home Entertainment. Based upon Voyager, the third of eight books in Diana Gabaldon’s international best-selling Outlander series about a British WWII nurse who is mysteriously swept back in time to Scotland in 1743, OUTLANDER: SEASON THREE sees Claire (Caitriona Balfe in her Golden Globe® nominated role) and Jamie (Sam Heughan) attempting to make a life apart from one another but the fates have other plans as they find their way back to each other and set sail for new lands.

OUTLANDER: SEASON THREE contains all 13 episodes in a five-disc Limited Collector’s Edition, Blu-ray™ and DVD sets, along with 27 deleted and extended scenes with introductions by Executive Producer Ronald D. Moore, a gag reel and two featurettes. In “A Traveling Show Takes Sail,” the cast and crew describe what it was like moving the production from Scotland to South Africa and the challenges shooting aboard the Artemis ship; and Lotte Verbeek and other cast and crew discuss Geillis Duncan’s return this season in “The Transformation of Geillis Duncan.”

The Limited Collector’s Edition and Blu-ray™ exclusive content includes an exclusive additional scene with Lord John Grey & Lady Isobel Dunsany from the episode “Of Lost Things,” the original chemistry test between Caitriona and Sam with an introduction by Ronald D. Moore, the Outlander podcasts for each episode with commentary from Ronald D. Moore, Maril Davis, Toni Graphia and Matthew B. Roberts, and four additional featurettes. “Claire & Jamie: Together Again” discusses what it was like for Caitriona and Sam to work separately for half of the season and what it was like reuniting their characters after 20 years had passed, while “Jamie’s Revolution” and “Claire: Through Time” have Caitriona and Sam discussing their characters’ journeys this season. “Saying Goodbye to Frank & Jonathan Randall” is a final farewell to Tobias Menzies and both of his integral characters, Frank and Black Jack Randall. In addition, the Limited Collector’s Edition Blu-ray™ will feature special packaging, including 28 pages of behind-the-scenes photographs.

Synopsis:
The third season of Outlander picks up right after Claire travels through the stones to return to her life in 1948. Now pregnant, she struggles with the fallout of her sudden reappearance and its effect on her marriage to her first husband, Frank. Meanwhile, in the 18th century, Jamie suffers from the aftermath of his doomed last stand at the historic battle of Culloden, as well as the loss of Claire. As the years pass, Jamie and Claire attempt to make lives apart from one another, each haunted by the memory of their lost love. Separated by continents and centuries, Claire and Jamie must find their way back to each other. As always, adversity, mystery, and adventure await them, and the question remains: When they find each other, will they be the same people who parted at the standing stones, all those years ago?

Golden Globe® is the registered trademark of the HFPA.